Head on over to Passages to the Past to enter to win a free copy of Pendragon's Banner by Helen Hollick.  Here's Amy's post, just copied over.  In order to enter, go to: 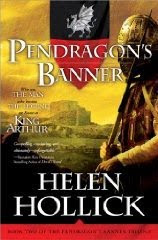 When it rains, it pours!!!  I have yet another giveaway, this time from my favorite publisher, Sourcebooks.  They are offering 1 copy of Pendragon's Banner (Book 2 of The Pendragon Banner trilogy) by Helen Hollick.

SYNOPSIS: Pendragon's Banner is the second book in Helen Hollick's exciting King Arthur trilogy, covering 459-465 A.D. This is not a fairy tale or fantasy. There is no Merlin, no sword in the stone, and no Lancelot. This is the most accurate Arthurian legend ever written, based on historical evidence and meticulous research.

At age twenty-four, King Arthur has the kingdom he fought so hard for and a new young family. But keeping the throne of Britain—and keeping his wife and three sons safe—proves far from easy. Two enemies in particular threaten everything that is dear to him: Winifred, Arthur's vindictive first wife, and Morgause, priestess of the Mother and malevolent Queen of the North. Both have royal ambitions of their own.

Read my review of The Kingmaking (Book 1)

Read my interview with Helen Hollick


* For 5 additional entries sign up as a follower; if you already are a follower you will automatically get this.


GOOD LUCK EVERYONE!   Remember-- to enter to win, go to:

And here's ANOTHER giveaway!  Check it out at Historially Obsessed: