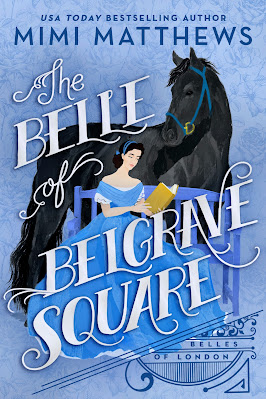 A London heiress rides out to the wilds of the English countryside to honor a marriage of convenience with a mysterious and reclusive stranger.

Tall, dark, and dour, the notorious Captain Jasper Blunt was once hailed a military hero, but tales abound of his bastard children and his haunted estate in Yorkshire. What he requires now is a rich wife to ornament his isolated ruin, and he has his sights set on the enchanting Julia Wychwood.

For Julia, an incurable romantic cursed with a crippling social anxiety, navigating a London ballroom is absolute torture. The only time Julia feels any degree of confidence is when she’s on her horse. Unfortunately, a young lady can’t spend the whole of her life in the saddle, so Julia makes an impetuous decision to take her future by the reins—she proposes to Captain Blunt.

In exchange for her dowry and her hand, Jasper must promise to grant her freedom to do as she pleases. To ride—and to read—as much as she likes without interference. He readily agrees to her conditions, with one provision of his own: Julia is forbidden from going into the tower rooms of his estate and snooping around his affairs. But the more she learns of the beastly former hero, the more intrigued she becomes…

Following this winter’s The Siren of Sussex, author Mimi Matthews now offers the second in the Belles of London Series, the fairy tale-inspired The Belle of Belgrave Square. As a lover of that folk genre and a fan of Sussex, I couldn’t wait to dive back into the world that Matthews is building with her characters. Although not as young, beautiful, and wealthy as the novel’s Julia Wychwood, I could nonetheless relate to her on a number of levels. I too, have struggled with anxiety over the years, and like her I am also a book addict! Her quote on page 216 had me laughing when she said, “You can never have too many books. That’s a fact.” While I don’t know if this is true in a practical sense, I appreciate the sentiment. Many a novel has transported me to another realm and has taken my mind off my troubles for a time. Matthews writes about Julia and her books, “It’s what they’d been for her. An escape. A gateway to another world. Somewhere she could experience romance and adventure without anxiousness or fear– even if that experience was only in her imagination.” (p.251)

Another way to combat anxiety and also boost confidence is through physical exercise. I have found this to be effective in the home video workouts I do. In The Belle of Belgrave Square, Julia finds a similar solution in riding her large black gelding, Cossack. While mounted on this magnificent horse, Miss Wychwood feels stronger and more formidable than her short stature exhibits.

The “fairy tale” element of Belgrave Square comes through the introduction of the second main character, Captain Jasper Blunt. Matthews clearly draws elements from Beauty and the Beast, but she also incorporates traits from other stories. Some authors and titles were unfamiliar to this reader, but the curious bookaholic in me has been inspired to seek out some of their works. Lady Audley’s Secret by Mary Elizabeth Braddon (1862) seems particularly interesting.

Although I enjoyed The Siren of Sussex this past January, I must say that I think I enjoyed The Belle of Belgrave Square even more! Many chapters concluded with sentences which hooked me into turning another page. The main characters were flawed but likable, and I found the romantic element to be realistic. Captain Blunt harbors quite a number of secrets. Some of them were fairly easy to determine early on in the story, but others were more elusive and created a delicious tension in the narrative. He is also often portrayed as a sort of “knight in shining armor”, and this old romantic loved that aspect of the novel’s tone. At the same time, Julia grows into her confidence over the course of the plot and is not always a helpless “damsel in distress.” Yes, I can confirm that she receives her Happily Ever After (and this is directly addressed in the text), but this is not a detail which would spoil the story. The enjoyment for the reader comes in witnessing the journey which the characters undertake in order to come to that HEA. Like fairy tales of old, The Belle of Belgrave Square derives most of its quality not in the final outcome (although that remains important), but in the steps required to arrive there.

For my conservative readers, I can report that the content would probably garner a “PG” or “TV-14” rating if this were put on film/video. There is a small amount of coarse language, but it is not severe. Sexual situations are addressed several times, but they are often couched in Victorian-era language to maintain propriety. The most colorful details come during scenes with two married persons, and Matthews chose to not be overly explicit in her writing here. Her writing talents are such that it truly wasn’t warranted. She is able to convey passion between characters in a way that is enticing without being salacious. As a Christian, I also appreciated the short scene when the Bible was addressed as a work of literature, containing fascinating adventures and drama.

For those who have not yet read The Siren of Sussex, knowledge of that text is helpful in understanding the interrelated friendships between various persons in Matthews’ world. However, she has written Belgrave Square in such a way that jumping into the second title of the series is not problematic. As a book nerd I recommend beginning with Sussex, but it certainly isn’t a requirement.

Mimi Matthews writes in Captain Blunt’s voice saying, “Stories like the ones we read in novels help us understand the human condition. They teach us empathy. In that way, they’re more than escape from the world. They’re an aid for living in the world. For being better, more compassionate people.” (p.251) In The Belle of Belgrave Square, she has not only brought to her readership another delightful tale of romance, mystery, liberation, and redemption, but she has also presented to the world a true-to-life fairy tale wherein an anxious bookworm falls for an enigmatic beast. Through their relationship, readers are given the opportunity to consider the plight of others in the community. Gruff exteriors or anxious spirits in people are usually there for a reason. We all carry burdens of one type or another. Matthews’ Julia Wychwood endeavors to understand the dour Jasper, and he enables her to conquer many of her fears as well. Together they make a pair which demonstrate admirable humanity in the face of a broken world. This produces a fabulous addition to a book series well on its way.

Thankfully there is more to come in a third title, The Lily of Ludgate Hill. Echoing the epilogue, I offer the notion: Clearly the reading public is “clamoring for more stories in this vein.” I’m pleased that Mimi Matthews has not exhausted her supply of them. 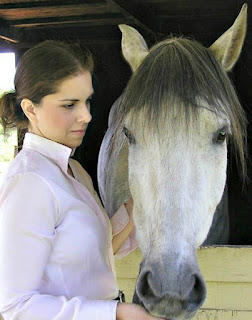 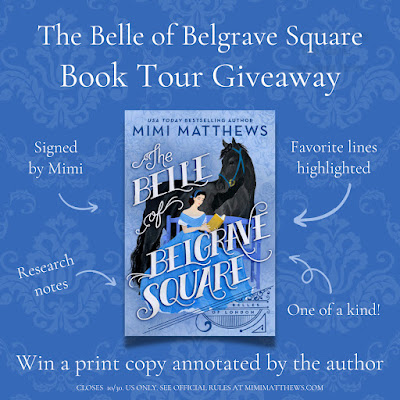 a Rafflecopter giveaway
Terms & Conditions:
Giveaway hosted by Mimi Matthews. No Purchase Necessary. Entrants must be 18 years or older. Open to US residents only. All information will remain confidential and will not be sold or otherwise used, except to notify the winner and to facilitate postage of the book to the winner. Void where prohibited.
Giveaway Details:
1 winner (selected at random by Rafflecopter) receives a paperback copy of The Belle of Belgrave Square, signed and annotated by the author with personal comments, underlining of her favorite lines, and other highlights by Mimi Matthews.
Giveaway is open from 12:01 am Pacific time 10/03/22 until 11:59pm Pacific time on 10/30/22.
The winner will be announced on Mimi's blog on 10/31/22.
Posted by Laura Hartness at 11:00 PM No comments: