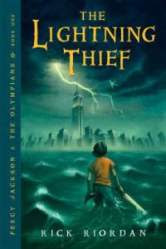 Not too long ago I saw a movie trailer for the upcoming Lightning Thief, coming to theaters in February 2010. Knowing it was based on a YA book, I thought I'd check it out.  Unfortunately, while I'm looking forward to the movie, I wasn't as enamored with the book as I thought I'd be.

The Lightning Thief is written in the first person, from the vantage point of Percy Jackson, young 6th grader in New York.  Over the course of the story he discovers that he's actually the son of the Greek god Poseidon.  His mortal mother has always kept this fact from him and has taken great measures to keep him safe from Poseidon's enemies.  Percy is eventually drawn into a fantastic, mythological-yet-real world of Classic gods and monsters, taking on a quest to prevent a massive war amongst the gods.

While many fantasy tales take on familiar themes that have been told time and again throughout the course of history, I found this one to be a little too derivative.  The similarities to the Harry Potter books were so many I eventually quit counting them all.  I almost felt like this author was simply telling his own Potter story and just changing a few of the basic tenants around.  Like Harry, Percy was informed several years into his life that he was special.  The notion of half-blood people (one parent "normal", the other wizard/god) is an important point in both novels.  Harry and Percy have been living with one or more guardians who despise them. Both boys go off to a special school/camp for kids like themselves. There they train and learn the lessons of being who they are.  There are separate houses dividing up the students into separate types of groups.  Harry's got a magic wand, Percy has a magic sword.  Both boys fight beings that would normally be too overwhelming for their abilities and they overcome.  I could go on , but the point is made.

However, unlike Potter, this story wasn't able to get me to suspend disbelief in the reality of the tale.  I can believe there's a Hogwarts School of Wizardry.  I can believe there's a magical land of Oz and that Superman can fly.  These stories have a way of getting me to believe their realities within the confines of their stories.  But for some reason, I frequently was drawn out of the story in Thief and just couldn't accept its premises. Monsters in the St. Louis Arch? The entrance to Olympus in New York and the entrance to the underworld in California?  Riordan gives reasons for these locations, but I still couldn't buy it as a reader.

Having said all that, I still enjoyed the story enough to finish the novel.  There were many chapters that ended with cliffhangers that compelled me to keep reading.  While I couldn't buy the premise of the story, I still wanted to know what happened.  Ultimately, I was entertained and I'm looking forward to seeing the movie as well.

Whether I'm going to read the other books in Riordan's series is a question I haven't answered yet.  I might give Book 2, The Sea of Monsters a shot, if for no other reason that I know it'll be a somewhat fun (if unbelievable) read.