I recently received word that a new Austenesque novel will be published soon, and I'm excited to be a part of the cover reveal for this title.  Love at First Slight by J. Marie Croft seems like it will be a delightful diversion, and I look forward to reading it soon.  Take a look at the lovely cover and book information: 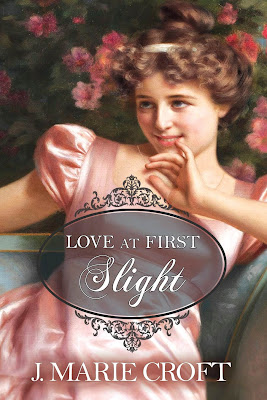 “It may not be universally acknowledged, but the unvarnished truth is that a young widow in possession of a good fortune is not necessarily in want of another husband.”

In this humorous, topsy-turvy Pride & Prejudice variation, all the gender roles are reversed. It is Mr. Bennet’s greatest wish to see his five sons advantageously married. When the haughty Miss Elizabeth Darcy comes to Netherfield with the Widow Devonport nee Bingley, speculation—and prejudice—runs rampant.

William Bennet, a reluctant and irreverent future reverend, catches Miss Darcy’s eye even though he is beneath her station. However, his opinion of her was fixed when she slighted him at the Meryton Assembly. As her ardour grows, so does his disdain, and when she fully expects to receive an offer of marriage, he gives her something else entirely …. 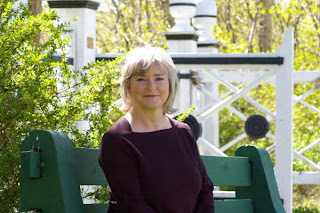 J. Marie Croft, a Nova Scotia resident and avid reader all her life, discovered Jane Austen's works later than others but made up for lost time by devouring the six novels and as many adaptations and sequels as she could find. In the midst of reading prodigious amounts of Austen-based fan-fiction, she realized, "Hey, I can do that." In her spare time, when not working at a music school or on a wooded trail enjoying her geocaching hobby, she listens to the voices in her head and captures their thoughts and words in writing. Her stories are light-hearted; and her motto is Miss Austen's own quote, "Let other pens dwell on guilt and misery." J. Marie Croft is a member of the Jane Austen Society of North America (Canada) and admits to being "excessively attentive" to the 1995 BBC version of Pride and Prejudice. She can be contacted at jmariecroft@gmail.com.
Posted by Laura Hartness at 12:01 AM 4 comments:

In 1777 Jack Absolute, the charming lover in Sheridan's comedy The Rivals, is famous throughout London. However, this notoriety comes as something of a shock to the real Jack Absolute when he arrives in England after four months at sea. But there's barely time for outrage before he finds himself dueling for his life. Even worse, as soon as he's won the duel he's forced to flee London by the quickest means possible, becoming a spy in America's war of Independence.


Thus we meet Jack Absolute - rogue, duelist, charmer and Captain in the Light Dragoons. From the field of honor in London through the pivotal battle of Saratoga to a hunt for a double agent in wintry Philadelphia, this novel marks the impressive debut of this new series.

*          *          *
Novels set during the American Revolution are not my usual genre, but the description of Jack Absolute drew me in.  He seemed like a cross between the men found in the Regency novels that I do frequent and our modern-day James Bond.  Thankfully, I was not disappointed in that regard.  Jack Absolute was a fun, rollicking, adventurous good time.  He is a bit of a playboy, but I was won over by his heart and personality.

The character of Jack Absolute is derived from The Rivals, a play written by Richard Brinsley Sheridan and first performed in 1775.  The author of Jack Absolute, C.C. Humphreys drew from his own acting experiences, as he has played the character of Captain Jack in The Rivals himself.  The Captain in the novel is a bit of a distillation and expansion of the character in the play.  We see that the “real” Jack in Humphreys’ world is very similar to the “scripted” Jack in The Rivals, but in many ways the Rivals’ Jack is more of a caricature of Humphreys’ version. This may seem confusing, but C.C. Humphreys makes the concept very clear in the book.

As an American, it was interesting for me to see our Revolution from the other side—through the eyes of the British.  According to Humphreys, there was more at stake in this war than just American independence.  The British side was also fighting for the rights of Native Americans, people whom they felt were being exploited by the Americans, in the name of profit and conquering land.  Humphreys explores this idea in a conversation between Jack and an associate. They discuss how white men have hurt the Native Americans, and Jack exhibits his concern to protect what is left of their world.  The associate asks:

“And you think the Rebels will not [protect what’s left]?”

“I know they will not…The British North America Act in seventeen sixty-three gave the Indians rights—especially the right to their own land. Boundaries were negotiated, limits many Americans—and I include native-born English-Americans here—cannot tolerate. They see wealth in uncontrolled expansion.  Or rather, expansion controlled by them.  George Washington?  Principal shareholder in the Vandalia Company.  They seek to expropriate all the lands designated tribal.  Not only such lands as my brothers still control, but west beyond the Alleghenies, into Ohio, Michigan, Indiana, Wisconsin… It is the untold story of this war and it is the story of every war ever fought.  Greedy men seeing someone weaker with something they want.”

“I see…I had not considered this.”

“Joseph Brant once called the act of sixty-three the Indian Magna Carta. And that is the very cornerstone of English liberty.  That is worth fighting for.”

Jack came by his instinct to protect the Indians through his relationship with the Iroquois. During his many travels he spent much time with them, even adopting some of their ways.  One of his closest friends is his blood brother Ate', a Mohawk Indian warrior who frequently partners with Absolute in battle.  Together, Jack and Ate' fight for their threatened cause with passion and honor, and they save each others’ lives on more than one occasion.

During most of the novel, Jack serves as a spy for the British side.  Several of his adversaries go by code names and are very elusive.  Throughout his travels and battles, he is constantly on the watch for intelligence about these secret agents and their secret plans against the British. We see Absolute’s skills at breaking codes, which comes in handy when intercepting printed messages.  I found this aspect of Jack’s character to be very interesting.  There were modes of code making and code breaking which were new to me, ones I would have never considered in this age of encrypted computer codes and the like.

Jack Absolute inhabits many roles: Indian sympathizer, soldier, spy, friend and lover. While known for being a bit of a ladies’ man, he does meet a woman who makes him want to leave his rakish ways behind.  They have adventures over land and sea, and while she is not always with him during the entire tale, she is always at the back of his mind.  C.C. Humphreys does well in conveying the romantic details in Jack’s life.  The material is somewhat PG-13, but Humphreys certainly held back in his descriptions of Jack’s exploits.  I’m pleased with the inclusion of the romantic storyline in this novel; it appeals to the female audience and keeps our attention throughout the many descriptive battle scenes.

These battle scenes are an important part of Jack Absolute’s story, but there were times when I felt that the episodes within this arena were either too long or too frequent.  The book’s pace slowed for me when I read through those particular passages.  This may be because of my personal interests—I enjoy the romantic themes and the spy-related plotlines very much.  I’m sure lovers of the history of the American Revolution would enjoy these chapters, however.

Jack Absolute was an enjoyable novel, and I am pleased to know that there are two more Absolute novels, The Blooding of Jack Absolute

and Absolute Honor. Captain Absolute is a flawed character, but I find him interesting, fun and very likable.  C.C. Humphreys’ writing is well-crafted and researched.  I learned quite a few things about the American Revolution along the way.  I look forward to spending more time with Captain Jack, and expect the upcoming titles to be enjoyable as well.