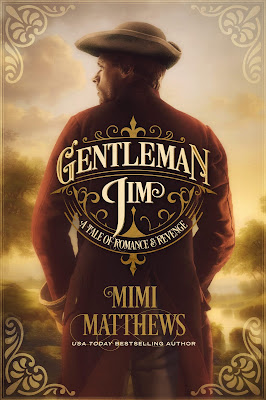 Wealthy squire's daughter Margaret Honeywell was always meant to marry her neighbor, Frederick Burton-Smythe, but it's bastard-born Nicholas Seaton who has her heart. Raised alongside her on her father's estate, Nick is the rumored son of notorious highwayman Gentleman Jim. When Fred frames him for theft, Nick escapes into the night, vowing to find his legendary sire. But Nick never returns. A decade later, he's long been presumed dead.

After years spent on the continent, John Beresford, Viscount St. Clare has finally come home to England. Tall, blond, and dangerous, he's on a mission to restore his family's honor. If he can mete out a bit of revenge along the way, so much the better. But he hasn't reckoned for Maggie Honeywell. She's bold and beautiful--and entirely convinced he's someone else.

As danger closes in, St. Clare is torn between love and vengeance. Will he sacrifice one to gain other? Or, with a little daring, will he find a way to have them both?

Welcome to the final stop of the Gentleman Jim blog tour! I'm thrilled to be offering an excerpt of this intriguing new novel by Mimi Matthews, available below. Prior to my post, three other blog stops featured passages from the novel. If you'd like to read them first, they can be found here:
The entire tour featured dozens of other stops, with reviews and interviews as well. Here is the full listing, if you'd like to stop by them all! 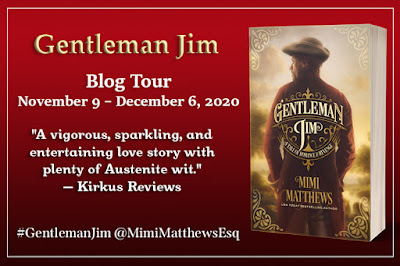 Exclusive Book Excerpt from Gentleman Jim (Chapter Four, pp. 56-59)
Maggie’s smile faded. “Gossip? What gossip?”
Jane’s eyes narrowed at her brother. “Yes, George. Exactly what are you talking about?”
“That’s the very thing I’ve come to tell you. I was out riding this morning in the park. I’ve bought a new gelding, Miss Honeywell. A prime goer. Not unlike that blood chestnut you had back when—” He broke off at a stern look from his sister. “Yes. Quite. As I was saying, I was out in the park this morning. All the fellows were talking about it. It’s not quite the thing to speak about in front of ladies, but I daresay Jane has already told you—”
“Yes, yes. She knows about the duel.” Jane waved him on with an impatient hand. “What did you hear?”
Maggie leaned forward in her chair, her attention fixed on Jane’s brother. St. Clare had promised not to hurt Fred. And he’d given her no reason to doubt his word. It had all seemed to be settled.
“A lot of the gents in the park were present at the duel,” George went on between bites of his plum cake. “I wish I’d been! There’s not many who’ve seen St. Clare shoot, excepting Lord Vickers and Lord Mattingly. They traveled a bit with him on his grand tour, you know, and they said he was as deadly as all the rest of the Beresfords. Not that St. Clare’s reputation meant a thing to Burton-Smythe. But then, as I told Vickers, Burton-Smythe’s so full of self-importance that it would never even occur to him that any man could best him.”
“Oh, go on!” Jane demanded.
“Well, the short of it is, the handkerchief was dropped and Burton-Smythe fired. His shot went a touch wide. Nearly singed the viscount’s sleeve, I heard. And St. Clare didn’t even flinch! Just stood there and without batting an eye, fired a bullet straight through Burton-Smythe’s shoulder.”
Maggie’s mouth fell open. “St. Clare shot Fred?”
“To be sure, he did, but that’s not even the best part.” George’s eyes were bright with excitement as he entered into the spirit of the tale. “Burton-Smythe was lying on the ground with the surgeon kneeling over him, and St. Clare walks up to him as cool as you please and says, ‘Let this be a lesson to you, my good man. If you’re going to act the brutish country squire, best stay in the country.’ And then he leapt into his curricle and drove off.” George laughed appreciatively. “If that don’t beat all!”
Maggie felt a sickening flicker of dread in her stomach. One didn’t have to be killed outright in order to die from a gunshot wound. Why, if Fred’s shoulder festered, he could expire within the week! And then what was she to do? “Where is Fred now? Is he all right? Oh, Jane… Do you suppose I should go to him?”
“I say, Miss Honeywell, don’t put yourself into a taking,” George said. “Burton-Smythe is holed up at his lodgings. He’s not hurt too badly—the bullet went clean through—but I hear he’s in as foul a mood as anyone ever saw him. You’d be wise to leave him be for a while.” George cleared his throat, giving an uncomfortable tug at his cravat. “Besides that, there’s some who already think you have an agreement of some sort with Burton-Smythe—”
“Indeed, I do not!” Maggie objected.
“—and if you arrive at his lodgings to nurse him through his injury you may as well put a notice of your betrothal in the paper.”
“Is that the subject of the gossip you mentioned?” Jane asked. “Well, is it?”
George groaned. “You know how things are. It’ll begin with a few old tabbies stopping Miss Honeywell in Bond Street to ask after Burton-Smythe’s health and end with all of the ton saying that the duel was fought over her honor.” He shook his head in disgust. “Some of the fellows are already talking. Wouldn’t you know it, that infernal gabster Beauchamp was at the duel, and by the time I arrived at the park, he was already there, telling the other gents how Burton-Smythe and St. Clare had looked as if they hated each other, and how he’d give a monkey to know what the duel had really been about. ‘No doubt it’s a woman,’ he says. What a heap of rubbish. Everyone knows they fell out over a game of cards.” 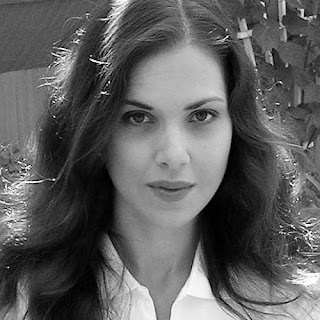 USA Today bestselling author Mimi Matthews writes both historical nonfiction and award-winning proper Victorian romances. Her novels have received starred reviews in Library Journal, Publishers Weekly, and Kirkus, and her articles have been featured on the Victorian Web, the Journal of Victorian Culture, and in syndication at BUST Magazine. In her other life, Mimi is an attorney. She resides in California with her family, which includes a retired Andalusian dressage horse, a Sheltie, and two Siamese cats. Her next romance, The Siren of Sussex, will be out in 2022 from Berkley/Penguin Random House.
Website
Twitter
Facebook
Goodreads
Pinterest
BookBub
Posted by Laura Hartness at 12:00 AM No comments: