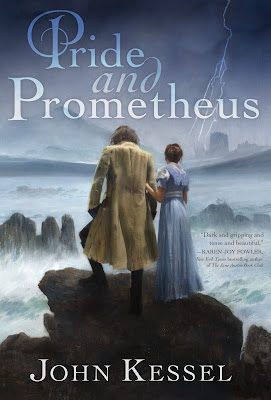 Pride and Prejudice meets Frankenstein as Mary Bennet falls for the enigmatic Victor Frankenstein and befriends his monstrous Creature in this clever fusion of two popular classics.

Threatened with destruction unless he fashions a wife for his Creature, Victor Frankenstein travels to England where he meets Mary and Kitty Bennet, the remaining unmarried sisters of the Bennet family from Pride and Prejudice. As Mary and Victor become increasingly attracted to each other, the Creature looks on impatiently, waiting for his bride. But where will Victor find a female body from which to create the monster’s mate?

Meanwhile, the awkward Mary hopes that Victor will save her from approaching spinsterhood while wondering what dark secret he is keeping from her.

Pride and Prometheus fuses the gothic horror of Mary Shelley with the Regency romance of Jane Austen in an exciting novel that combines two age-old stories in a fresh and startling way.


Several years ago the genre of Jane Austen Fan Fiction (JAFF) took a turn into thematic blends that I had no interest in partaking. There was Pride and Prejudice and Zombies, various iterations of JAFF that involved vampires, and a novel that portrayed Darcy as a rock star. These deviations did not appeal to me for the most part, although I will acknowledge that I enjoyed Monica Fairview’s Steampunk Darcy.  Recently I was given the opportunity to read and review John Kessel’s novel Pride and Prometheus, a mashup of a Pride and Prejudice sequel and Mary Shelley’s Frankenstein. I was going to decline the offer, but when my 12 year-old got wind of the premise, he urged me to read the novel. I decided to accept.

As I have said to my son several times since then, I have been so pleased with this novel! John Kessel, with his educational background of both science and literature, has crafted something that truly transcends fan fiction.  Pride and Prometheus is quality work, a volume that can be enjoyed by many, not only Janeites. The characters are captivating, well drawn and fully formed. Kessel’s writing is superb, striking the perfect balance of literary tone with modern accessibility. While some familiarity to Austen’s and Kelley’s characters is helpful, Kessel offers enough expository material to allow all readers to follow the narrative.  For example, I have never read the original Frankenstein, and had only a cursory knowledge of the main characters, Dr. Frankenstein and his Creation. Kessel's details with these characters made me more than comfortable with them. Due to my reading of Pride and Prometheus, I have now purchased a copy of Frankenstein and intend to read it as well.  This is perfect timing, as it coincides with the 200th anniversary of the 1818 edition of the classic.

For those who might shy away from any notion of the horror genre, I can state unequivocally that Pride and Prometheus is not one to cast fear into the heart of its reader. I don’t care for the horror genre in any medium. I had to be dragged, practically kicking and screaming to see the movie The Sixth Sense almost twenty years ago. While I did enjoy that film, that is about as “spooky” as I’ll go in terms of a sinister theme.  Kessel’s novel does not veer in that direction. It does retain a bit of a gothic, dark tone, but never once were the potentially gruesome aspects of the story used to terrorize the reader.  My 12 year-old would find the these elements to be quite tame.

While the novel does have some romantic components to it, this was a lesser detail in comparison to other issues at hand. The major themes contemplated philosophical and metaphysical questions such as “What does it mean to be human?” and “How far does God’s sovereignty extend?” The Nature vs. Nurture debate is also a large consideration.

As in Austen’s original work, Mary Bennet is interested in religious topics, but as we find her in Pride and Prometheus, she is now 32 years old, still unmarried, and her interests have now extended to areas of science. She sees no contradiction in this, as science reveals God’s hand in creation. For the majority of the novel, the focus is not so much on Mary’s romantic interest in Dr. Frankenstein as it is on her relationship with his Monster. She is often an intermediary between the two, striving to guide the Creature to a greater humanity while attempting to show Dr. Frankenstein what she sees in his Creation.

In that area of romance, I must commend Kessel’s choices. I kept waiting for him to guide the characters into cliched or predictable paths, and I prepared myself to be disappointed in him as a writer. Not once did he take the bait that would have been snapped up by lesser authors. Even near the conclusion of the novel, I thought he might take an easy way out with Mary’s fate, but he did not. I can say that the last few chapters felt a little disjointed from the rest of the narrative, but the directions in which the characters went were realistic, not formulaic.  No one really gets their “tied with a bow”, Hollywood ending. There is a tone of melancholy to it, but in making this literary choice, I think John Kessel has made the right one. He has told his own tale, while remaining true to the images that Austen and Kelley have created in their original works.  In that sense I believe Kelley and Austen would be pleased with how Kessel has managed his stewardship of these characters.

In addition to offering my hearty recommendation of Pride and Prometheus, I also greatly endorse the audio book edition of the novel.  I treated myself to a copy from Audible.com, which allowed me to also enjoy the book while driving and doing household chores. The story is performed by three narrators, James Langdon (Dr. Frankenstein), Samuel Roukin (the Creature) and Jill Tanner (general narrator, but with a focus on Mary).  I heartily enjoyed James Langdon’s performance in another fabulous novel, The Map of Time, so I was greatly pleased to hear his voice again. His portrayal of Dr. Frankenstein was superb. Samuel Roukin’s portrayal of the Creature was well done, but he came off as a bit too “polished”, given that this character was a naïve 3 year-old in some ways. The Creature was also highly intelligent, so in that sense Roukin’s tone was just fine. Jill Tanner’s lovely English accent was also perfect for the piece.  I highly recommend this recording to audio book listeners.

When I was several chapters into the novel, I had the opportunity to meet John Kessel at an event at Scuppernong Books in my town of Greensboro, NC.  I rarely get the chance to meet my authors, so this evening was a thrill for me.  Although we didn’t have a huge turnout for the appearance, I enjoyed sitting with John to discuss Austen, his book and other topics. I was especially grateful for the additional insights into his characters, which made reading the rest of the novel that much more enjoyable.

Dr. Kessel discussed the notion of the “uncanny valley”, and how that applied to Dr. Frankenstein’s Creature.  Some of you may recall the animated movie The Polar Express.  At the time, this 2004 film was at the cutting edge of motion capture and computer animation. The creators did their very best to make the characters seem as human-like as possible, especially in the eyes. They achieved this to a high degree, but they weren’t able to capture the humanity of the faces to 100% efficacy. This led to a certain discomfort for many viewers who looked into the eyes of these animated characters.  They were so human, and yet…not.  It’s a very disquieting feeling, and I understood exactly what Dr. Kessel meant when he described it.  This is the same feeling that those coming into contact with the Creature had when they saw him.  He was a re-animated dead body.  He was somewhat human, yet…not.  Most people, upon seeing him, would either run in terror or attack him.  Thus he led a very solitary life, and hated most humans.  In many ways, this was completely understandable.  This is what made his relationship with Mary that much more captivating. She grows to see the humanity in him, as is seen in the figurative and literal journey that they take during a great portion of the novel. I think in many ways, she sees that he has a soul, and if she guides him well enough, she could show him the way of salvation. Despite his hideousness, I believe that she sees God’s hand in his creation, and thus God’s love for him.

John’s work on Pride and Prometheus is so well done, and I had to ask him if he has plans to do another novel in this vein, either another piece of Austenesque fiction, or a derivation of another classic work.  He replied that he likes to keep his writing projects quite diverse, and that at this time he has no plans to do another book like this one.  As his reader I hope that this novel is so successful that his publisher will urge him to do another, but we will have to see.  In the meantime, if you enjoyed Kessel’s style, he has a number of award-winning titles out there, many of which are in the short story format.

So despite my initial hesitation (and thanks to my son's urging), I again offer my high praise for Pride and Prometheus. Lovers of Austenesque fiction will certainly enjoy this, but fans of historical fiction and literature in general can also find a new favorite author in John Kessel. His writing is captivating, his characters are well-drawn and his writing choices are never cliched. Congratulations, Dr. Kessel, and I offer my vote for another title of this kind.  Perhaps something with Mr. Dickens…?

Wunderkind PR has been very generous to offer a finished print copy of Pride and Prometheus to one of our U.S. readers!  Please utilize the Rafflecopter widget below to enter. The only required entry is your email address, so that we may contact you if you win. All other entries (including the interesting comment topics!) offer bonus points for the giveaway. Contest period closes at 12:01am EST on March 31, 2018. 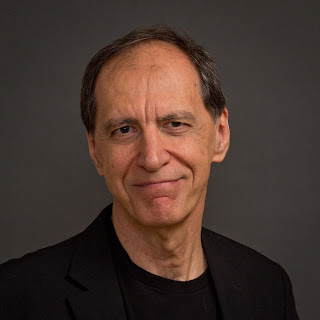 Born in Buffalo, New York, John Kessel's most recent book is the new novel Pride and Prometheus.  He is the author of the earlier novels The Moon and the Other, Good News from Outer Space and Corrupting Dr. Nice and in collaboration with James Patrick Kelly, Freedom Beach. His short story collections are Meeting in Infinity (a New York Times Notable Book), The Pure Product, and The Baum Plan for Financial Independence.

Kessel's stories have twice received the Nebula Award given by the Science Fiction and Fantasy Writers of America, in addition to the Theodore Sturgeon Memorial Award, the Locus Poll, and the James Tiptree Jr. Award. His play “Faustfeathers'” won the Paul Green Playwright's Prize, and his story “A Clean Escape” was adapted as an episode of the ABC TV series Masters of Science Fiction. In 2009 his story “Pride and Prometheus” received both the Nebula Award and the Shirley Jackson Award. With Jim Kelly, he has edited five anthologies of stories re-visioning contemporary short sf, most recently Digital Rapture: The Singularity Anthology.

Kessel holds a B.A. in Physics and English and a Ph.D. in American Literature. He helped found and served as the first director of the MFA program in creative writing at North Carolina State University, where he has taught since 1982. He and his wife, the novelist Therese Anne Fowler, live and work in Raleigh, NC.