Book Review: Stronger Even Than Pride by Gail McEwen 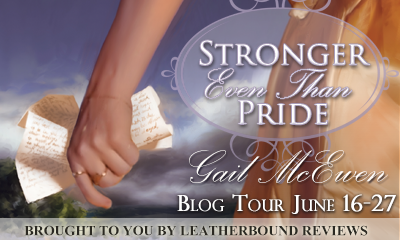 "...in his behaviour to me there were stronger influences even than pride." When George Wickham speaks these words to an impressionable Elizabeth Bennet, she can have no idea how true they will turn out to be. Stronger Even than Pride, Gail McEwen's latest novel, explores whether love can survive the biggest obstacles that Fate and a most ruinous stubbornness-can conjure up to separate two people destined to be together.


After Elizabeth refuses to read the faithful narrative of Darcy's dealings with Mr Wickham, this Pride and Prejudice variation takes an unexpected turn when she chooses to exonerate the wrong man. Events quickly spiral out of control, and Fitzwilliam Darcy is forced to watch helplessly as the woman he loves slips further and further from his grasp.

Can there be a happily ever after for them? Can a love, stronger than pride, redeem even the worst mistakes? 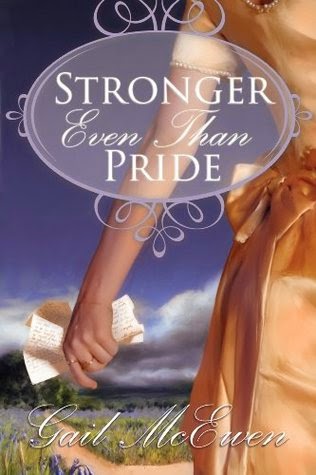 Warning: Spoilers ahead.  If you’d like to avoid plot revelations, skip the paragraphs posted between the triple asterisks.

Lovers of Pride and Prejudice will recall the moment in which Elizabeth Bennet receives a letter from Mr. Darcy, whose pitiful marriage proposal she recently rejected.  Within the missive he explains the basis for his feelings, and also gives an account of his past history with the dastardly George Wickham. Elizabeth had been operating under false information, as Wickham had been painting himself as a victim of Fitzwilliam Darcy’s lack of charity and loyalty. In truth, George had been an irresponsible steward of his inherited portion of Darcy family money. Following this, he continued in his avaricious ways by trying to beguile Darcy’s young (and very wealthy) sister Georgiana into marrying him, simply because he was a fortune-hunter. In addition, Darcy addresses his decision to dissuade his friend Charles Bingley from pursuing Elizabeth’s sister Jane. He sincerely felt that his friend deserved to court a woman who seemed to take earnest interest in him, and Darcy could not perceive any real attraction on the part of the demure Jane Bennet. As such, he prompted Bingley to leave his interest in Jane behind.


In Gail McEwen’s novel Stronger Even Than Pride, the plot makes a distinct turn at a crucial point in the story.  Elizabeth is in the throes of reading Mr. Darcy’s letter, but in frustration over his attitude, she tosses the note away before reading its entire contents.  More specifically, she never learns the true nature of George Wickham. She continues to believe the man’s lies, and responds positively when he pursues her romantically.  Wickham doesn’t truly love her; he merely wants Lizzie for himself, the woman whom Darcy had tried and failed to marry. His motivations are fueled by spite towards a man he has resented for much of his life.

I’ve read several Pride and Prejudice “diversions” over the years, and this one has an interesting tone.  It’s notably darker than others, as Elizabeth’s relationship to Wickham causes her life to descend into squalor. While we don’t get many chapters of the Darcy’s newlywed life in Pride and Prejudice, most would assume that they lived happily ever after.  Elizabeth undoubtedly would have had social obstacles to surmount, but one would surmise that her choice in husband was a good one, leading to a life of contentment with him at Pemberley.  McEwen’s Lizzie does not initially follow that path.  And instead of aligning herself with a caring, providing husband, she associates with the self-absorbed, irresponsible Wickham.  The spunky, bright Elizabeth dissolves into a mere shell of a woman, cut off from society and barely existing as an individual.  It’s quite tragic, really—not in an overly dismal way, though.  Her station simply stands in such stark contrast to what she could have enjoyed; it made my heart ache for her.  Elizabeth’s “could have been” was missed by such a small margin.  It made me root for her so much, wanting her to have the life she deserved.

Fortunately, the winds of change come about and set Darcy and Elizabeth back on the course to happiness.  Their resulting life isn’t as picturesque as what may have been in the original Austenian vision, but a great amount of it is redeemed.  As individuals they are probably stronger for having been through so many trials, but the emotional scars and difficult memories will always remain. Their story is also an illustration of true, enduring love, one that forgives mistakes and sees through poor choices to the pure heart within. Their love, which is stronger than even pride, proves to be robust enough to survive more than most could bear. This makes for compelling storytelling, and while it diverts quite a bit from Austen’s original vision, I found it to be an enjoyable speculation.

A word to my fellow conservatives: When I agreed to review Stronger Than Even Pride, I was not aware of the adult content included within.  Sexual situations within the story were at times fairly graphic. Characters do not always wait until after marriage to have relations. And while I know these moments were realistic for the time period (or any time period), I felt there were more details than necessary.  Gail McEwen is an excellent writer, and the same story could have been told without all the adult content.

Overall however, I found Stronger Than Even Pride to be an interesting diversion from the Austen classic. On the whole the characters remained true to their original traits; they simply took a few but significant turns, which led them down paths they never expected to travel.  Gail McEwen’s writing style is predominantly quite elegant, yet is very accessible to the modern reader. My one caveat aside, I look forward to reading more of McEwen’s work, either in a sequel to Stronger Than Even Pride, or perhaps in another Austenesque diversion instead. I imagine she would take these Regency characters on some very intriguing sojourns indeed.