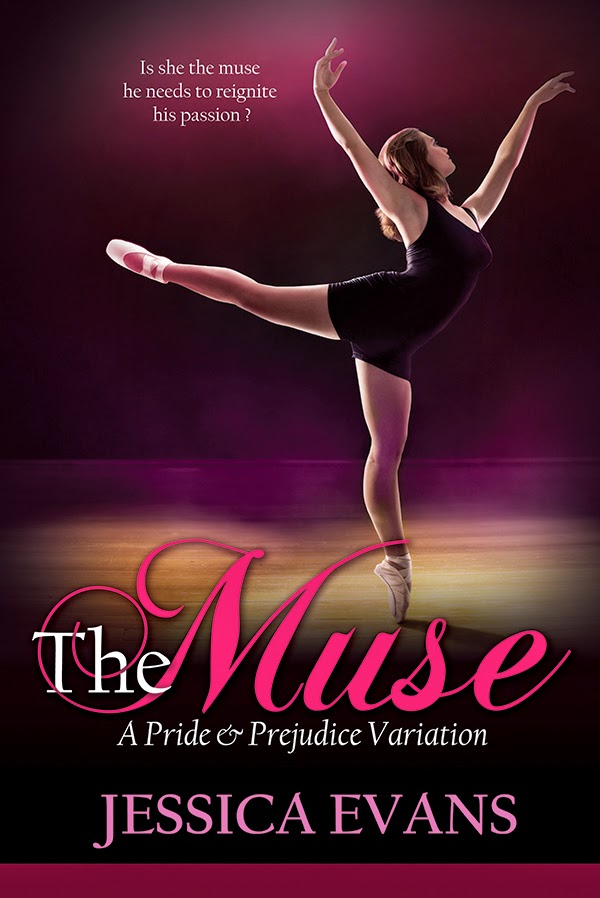 Today The Calico Critic welcomes Jessica Evans, author of the new novel The Muse.  Jessica has put a very creative spin on Pride and Prejudice, one that I haven't seen thus far.  Both lovers of Austen's work and the dance arts might find this Austenesque fiction to be right up their alley.  As it's the holiday season, many indulge in a bit of ballet this time of year, taking in The Nutcracker and marveling in the amazing talents of the accomplished performers. One can only imagine the drama that goes on behind the scenes in these complex productions.  I imagine we'll get a nice taste of this in Evans' The Muse. Check out the excerpt below, and if you ever get a chance to read The Muse, let us know what you thought of it!

Giveaway Notice:  Check out Jessica's giveaway on Goodreads, ending on December 15th.  Enter while you still can!


Elizabeth Bennet, the newest corps de ballet dancer at Ballet Theater of New York, dreams of rising through the prestigious company’s ranks to become a prima ballerina. When she’s cast in superstar choreographer William Darcy’s newest work, she believes she’s one step closer to realizing her dream–until she meets him.

William Darcy, the former dance legend and ballet bad boy, is a jaded perfectionist who dancers both fear and admire. Although touted as the next big thing in the ballet world, he secretly battles a bad case of artist’s block–until he meets Elizabeth Bennet.

Tempers ignite between Elizabeth and Darcy, but he’s irresistibly drawn to the stubborn and beautiful corps de ballet dancer. Could she be the muse he needs to reignite his passion for ballet?

Excerpt: The Muse by Jessica Evans


Elizabeth is stuck in Charles’ country home with Darcy, Caroline Bingley, and her sister, Jane. In the scene before this one, she’s accidentally thrown up all over his shoes.

The good thing about having his shoes puked on was getting out of hiking and being able to sit inside by a fireplace and read. The bad thing was that William really liked those shoes, but he would just get another pair the next time he was at Barney’s.

William hadn’t gotten much sleep that night, and it wasn’t because of the chaos that had ensued after Elizabeth’s accident. He had awakened several times, keenly aware of her presence two doors away. He rolled his eyes. She’d thrown up on his shoes for C****** sake! Shouldn’t he be disgusted with her?

But he wasn’t. In fact, at two in the morning, he kept replaying moments of their dinner conversation and smiling to himself when he remembered the funny parts.

What was he doing? It was annoying. Sure, she was pretty, and he was attracted to her as any man would be around a pretty woman, but it was starting to go somewhere that made him nervous. She was too young—the same age as his kid sister. She danced in the corps de ballet and was in his piece! His self-imposed hands-off policy forbade him from ever considering a liaison with her.

Yet, in the wee hours of the morning, William had spent a lot of time considering Elizabeth. At three-thirty, he’d gotten up and done a short workout in his room, hoping the exercise would tire him. Then, he started reading his book. By the time the rest of the hiking party was getting dressed, William had been awake for hours, and he refused to go with them. He needed rest. It had nothing to do with the fact that he would be alone in the house with Elizabeth Bennet. Nothing. And to prove that to himself, he hid out in the library, not the kitchen or the living room where he might run into her. Besides, she didn’t seem to be awake yet.

At one o’clock in the afternoon, his stomach grumbled, and William took his book to the kitchen to make himself a sandwich. When he got there, however, his heart nearly stopped. With her back turned to him, Elizabeth stood on her tiptoes, reaching for something on a high cabinet shelf. She wore nothing but an oversized sweatshirt that stopped mid-thigh. William tried not to stare, but he couldn’t help glimpsing the stretch of bare thighs and lean calves. Her wet hair hung down her back, making a little damp spot at the top of her sweatshirt. When she heard him, Elizabeth whirled around instantly.

“How are you feeling?” William blurted at the same time Elizabeth said, “I was looking for the coffee.”

“Fine,” Elizabeth answered at the same time as William said, “Over there.”

They both chuckled uncomfortably. William walked over to the right cabinet and took out a canister of coffee. He handed it to her, and she accepted it, unable to make eye contact.

“I’m making myself a sandwich. Want one?”

They worked in silence, Elizabeth brewing herself some coffee and William taking out the ingredients for a ham and cheese sandwich from the fridge. With her back facing him, William snuck a look at her legs. He turned around and shook his head.

“Forget about it. They’re just shoes.”

A long moment of silence passed between them again.

“I thought you went hiking.”

William chuckled. “Someone ruined my shoes.”

“You couldn’t go hiking in those shoes, could you? They weren’t hiking shoes!”

Shrugging, he replied, “I hadn’t planned on going hiking anyway. That was Charles’s idea, not mine.”

Another long silence as Elizabeth spooned coffee into a filter. Once it began brewing, Elizabeth chuckled.

“I was just wondering if I hold the honor of being the only girl to ever barf on you. It’s not every day someone like me gets to ruin the shoes of the infallible Mr. Darcy.”

She was mocking him again in that way of hers. “Please don’t call me Mr. Darcy on a Saturday. And I’m not infallible.”

“I was under the impression that you believed yourself one step down from a god.” She smirked at him.

“Not one step down. Maybe two or three.”

William saw her lips curve faintly. The coffeemaker stopped spurting and gurgling. Grabbing a mug, Elizabeth poured herself coffee and headed his way towards the fridge. She splashed in some milk and took a long sip.

Something about what she just said bothered William. He certainly didn’t put on airs in the studio. It was typical corps de ballet thinking: He’s strict so it means he’s a jerk. He hated that. Elizabeth seemed on the verge of leaving the kitchen, and William didn’t want her to go before she understood his point of view.

“I don’t admit to being perfect. I just don’t think the dance studio is any place to bare all my flaws.”
Elizabeth raised an eyebrow and leaned her hip against the counter.

“Right. You’ve never demonstrated any insensitivity or self-importance in the studio.”

Elizabeth took a long sip of coffee. “There’s nothing wrong with that. But when you take too much pride in yourself? Certainly you admit that’s a flaw.”

“I call it confidence.”

“Yes, you’re confident that you’re better than everyone!” Elizabeth’s voice was tinted with an edge that William couldn’t fail to catch.

“And you’re confident that you’re always right without knowing the specifics of a person or a situation.”

Elizabeth paused. “Who would have thought you could know me so well in barely a day?”

“My credentials in psychoanalysis are as good as yours.”

She shook her head. “Excuse me, Mr. Darcy. I’m not feeling well. I’m heading back to bed.”

She breezed past him, leaving William exasperated and titillated at the same time. He sighed in frustration, replaced the sandwich fixings in the refrigerator, and retreated to the library where he spent the remainder of the day until the hikers returned.

Jessica Evans cut her writer’s teeth in various fan fiction forums starting at fifteen. Although she discovered Jane Austen’s novels as a college sophomore, she didn’t begin writing Austenesque until several years later. The Muse: A Pride and Prejudice Variation is her debut novel.

Jessica teaches sixth grade English in New York City. In her spare time, she reads a lot of Young Adult literature, and cooks and eats as healthily as possible. She lives in Brooklyn, NY.

Posted by Laura Hartness at 9:51 PM