In My Mailbox - February 21st

Welcome In My Mailbox on The Calico Critic!  This weekly post reports the books and related materials that have found their way into my collection this week.  This meme is sponsored by The Story Siren and The Printed Page ("In My Mailbox"/"Mailbox Monday").  Thanks to any fellow participants who stop by The Calico Critic!  I'll do my best to get around to as many of your sites as I can this week.

I haven't participated in this meme in well over a month!  I've had so many cool things come in, I couldn't not post today.  I'm not going to share a whole month's worth of deliveries, but here's what has arrived since February 7th:

Monday, February 8th -Sent over from Random House/Doubleday, The Man from Saigon by Marti Leimbach was made available via the Shelf Awareness email.  Supplies are available while they last.  You can click on the link below and order an ARC.  Hopefully they still have copies left:

On January 22nd I won a copy of The Yellow House by Patricia Falvey from the publisher Center Street in a giveaway on Twitter.  It arrived today!

Tuesday, February 9th - World Without End by Ken Follett arrived, which I won from Michelle at The True Book Addict.  She sent the library binding version, which is great!  Nice and sturdy.  Thanks Michelle!


Wednesday, February 10th - The following were sent by Sourcebooks
to read and review for their upcoming promotions:

The Man Who Loved Pride & Prejudice by Abigail Reynolds

A Cottage by the Sea by Ciji Ware

Thursday, February 11th - The Twilight Gospel: The Spiritual Roots of the Stephanie Meyer Vampire Saga by Dave Roberts.  This was sent over by LitFuse Publicity for it's upcoming blog tour in April.  I've actually never read Twilight, and now that I have this title, I'm looking forward to reading both.

Friday, February 12th - Kimberly Pauley hosted a giveaway on YA Books Central for those signing up for her newsletter.  When I won, she chose to send me the book Tempo Change by Barbara Hall.  As a former musician (French Horn), I think this'll be a fun one!

Tuesday, February 16th - Macmillan was giving away free copies of The Girl Who Could Fly through their Macmillan Kids e-newsletter, so I signed up to receive this novel by Victoria Forester.  It seems to be getting great reviews.  I'm hoping that my 9 yr-old will read it after I've had a chance to check it out.

I received Darcy's Story by Janet Aylmer in a Goodreads Swap.  Thanks, Lucy--it looks practically brand-new!   ;)

Jennifer Donovan at 5 Minutes for Books sent me Godmother by Carolyn Turgton after a contest win.  I love Cinderella stories, so this tale of the Fairy Godmother looks intriguing.  Thanks, Jennifer! 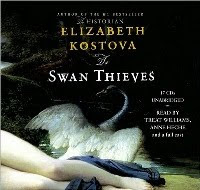 Friday, February 19th - This Laura (me) was thrilled to receive The Swan Thieves audio book from another Laura, who was hosting a giveaway at her blog, The Book Tree.  My print version of Thieves looks a little intimidating, and audio books always help.  I also have a long drive from Vero Beach to Charleston, SC next weekend, so this will be coming with me. Thanks, Laura!

Saturday, February 20th - From a giveaway at Boof's Bookshelf comes an ARC of Alice I Have Been by Melanie Benjamin.  I must say, I was highly influenced by the wonderful cover art on this one. And of course the subject matter looks interesting, too.  I'm honored to be one of Boof's winners in her first-ever giveaway.  Thanks, Boof!

Before Thanksgiving last fall, I won a copy of Decoding the Lost Symbol by Simon Cox from Sandy at Lil' Maddies MeeMaw.  Due to a mix-up with the publisher, it took a little while to get here.  Thankfully, Sandy was willing to stick with me and it eventually came through!  I look forward to reading this in conjunction with Dan Brown's The Lost Symbol.  Thanks, Sandy!

Whew!  That was a great couple of weeks.  Thanks for stopping by and taking a look.  Keep your eyes open-- whenever I get these read & reviewed, most of them will go up for giveaway!
Posted by Laura Hartness at 3:27 PM