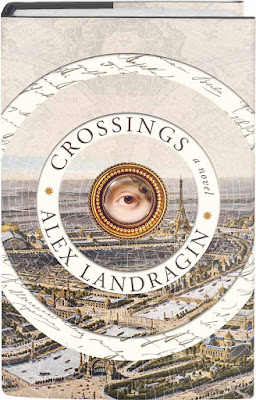 Crossings is an unforgettable and explosive genre-bending debut--a novel in three parts, designed to be read in two different directions, spanning a hundred and fifty years and seven lifetimes.
On the brink of the Nazi occupation of Paris, a German-Jewish bookbinder stumbles across a manuscript called Crossings. It has three narratives, each as unlikely as the next. And the narratives can be read one of two ways: either straight through or according to an alternate chapter sequence. The first story in Crossings is a never-before-seen ghost story by the poet Charles Baudelaire, penned for an illiterate girl. Next is a noir romance about an exiled man, modeled on Walter Benjamin, whose recurring nightmares are cured when he falls in love with a storyteller who draws him into a dangerous intrigue of rare manuscripts, police corruption, and literary societies. Finally, there are the fantastical memoirs of a woman-turned-monarch whose singular life has spanned seven generations. With each new chapter, the stunning connections between these seemingly disparate people grow clearer and more extraordinary. Crossings is an unforgettable adventure full of love, longing and empathy.
Some stories almost warrant a complete blackout of information before experiencing them. I tend to employ this tactic when a new movie is being released by a filmmaker or actor whom I particularly enjoy, who are artists that I trust to bring quality performances with entertaining narratives. I eschew watching their movie trailers, or in the case of novels, I also avoid critical reviews before reading the books myself. Sometimes arriving to a story with a veritable mental blank slate can encourage an element of discovery or surprise as one watches (or reads) the tale unfolding before them. This is not to say that I am undiscerning in my choices, but there are some cases in which I am willing to go in a bit blind to what is ahead.
For the novel Crossings by Alex Landragin, the extent of my knowledge of his work was only the plot summary reprinted above. Crossings sounded almost like a time-travel story, and the multiple methods of reading the book sounded very intriguing. The publisher graciously granted me a digital advanced copy for review. As I began the first pages, a sense of speculation and expectation took root, and I suddenly began to wonder if this could possibly be the novel my mind had been looking forward to, possibly for decades. I have had a handful of experiences while reading novels that I would describe as like “going down the rabbit hole.” Seasoned readers know what this is—becoming completely engrossed in a story that comes alive in such a way that you feel as if you are living inside it. Could Crossings indeed be a book like that? My heart certainly hoped so.
I will now pause to give the reader a moment to choose whether they want to read the next section. If you would like to come to Crossings with a somewhat “blank slate” as I did, I would encourage you to jump down to the last passage of the review, below the starred line. This is not to say that my thoughts will be overloaded with spoilers, but the following content is certainly more than I had when I set out to read the book.
Crossings has two manners in which it can be read: the traditional way, from start to finish, and an alternate way, following references at the end of certain chapters, to not just turn the page, but actually jump to another section, possibly hundreds of pages away from your current position. This does not change the meaning of the story per se (a la the old Choose Your Own Adventure books I read as a child), but it certainly changes the perspective of the reader, and the knowledge that they carry with them from section to section. This alternative method is called the “Baroness Sequence”, for reasons that will be made clear when the story is read.
I estimate that I read about 50% of the novel before I came to what I believe was an error in my advanced digital copy, as one of the Baroness “jumps” that I made resulted in a location that did not make any sense. I am certain this will not be a problem with the printed edition, or the final e-book edition either. Advanced copies are unfinished works, prone to typographical errors and omissions. As I had no way of knowing where to go from the strange location in which I found myself, I decided to start the book from the beginning, reading from start to finish in the traditional way. As such, my impression of the book is a mixture of the Baroness perspective and the “normal” one. I will comment on this more later.
Crossings entertains the notion of the transmigration of the soul, as has also been seen in several movies over the years, wherein two living souls swap bodies. In Landragin’s novel, there are multiple types of transmigration or “crossings”. Some are done “blind” and are temporary, with one soul not completely remembering that they had briefly occupied the body of another. Others are done very intentionally and with a more permanent arrangement in mind, such as between a young person wishing to die, and an ailing elderly person wishing for a new young body.

A note for my conservative Christian readers: As a Christian, I of course do not believe in this type of phenomenon, any more than I believe in magical portals to Narnia or time travel via standing stones as found in Outlander. Still, I am able to enjoy these stories and appreciate them for what they are: fantasy. This type of pseudo-suspension of disbelief must be employed if the reader is to enjoy the story. Also, the Christian religion is not always looked favorably upon in the novel, as it is a historical (and current) fact that not all believers share the Gospel in culture-sensitive, non-political ways. There is also a bit of sexual content in the novel, but it is not pervasive.
Back to the different reading methods: In some ways, the “Baroness Sequence” brought on a state of confusion for me, as the narrative tends to jump between large expanses of time, with different characters picking up the story and handing them off to others, in a way.  That said, the knowledge I gained from the various time periods actually was an aid to me when I began reading the book from start to finish. I think I would have been much more confused about the events that were transpiring, had I not spent a significant time in the “Baroness sequence”. If someone new to Crossings was to ask me which method I preferred, if I could only recommend one, I would advise to go with the Baroness. There is a certain amount of confusion in reading it that way, but if you can be persistent, I think that would be the best course of action. That said, for either reading method, I found it somewhat difficult to keep track in my mind which character was which. With the multiple cases of body-switching, there were many times when I wasn’t sure who was speaking. In hindsight, I probably should have committed a “map of souls” to paper. Perhaps that would have helped me in my disorientation. This was the element that kept Crossings from becoming the book I had hoped it would be. I did not go down the rabbit hole as much as I would have liked.
*      *      *      *      *      *
In many ways I enjoyed Crossings very much. It might be the debut novel for author Alex Landragin, but his literary skill is superb. His knowledge of history, cultures and languages is most impressive. I’m unaware of any plans for a sequel to Crossings, but this certainly should not be Landragin’s last work of fiction. His talent is remarkable, and I am certain he would do well to bring another novel to his audience. While I cannot give Crossings an unrestrained, absolute recommendation, I found it to be quite a unique and notable title, one I will remember for some time to come. 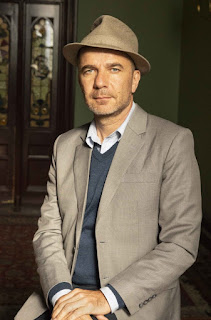 ALEX LANDRAGIN is a French-Armenian-Australian writer. Currently based in Melbourne, Australia, he has also resided in Paris, Marseille, Los Angeles, New Orleans and Charlottesville. He has previously worked as a librarian, an indigenous community worker and an author of Lonely Planet travel guides in Australia, Europe and Africa. Alex holds an MA in Creative Writing from the University of Melbourne and occasionally performs early jazz piano under the moniker Tenderloin Stomp. Crossings is his debut novel.
Connect with Alex
Website
Publisher
Goodreads
Facebook
Twitter
Posted by Laura Hartness at 7:57 PM