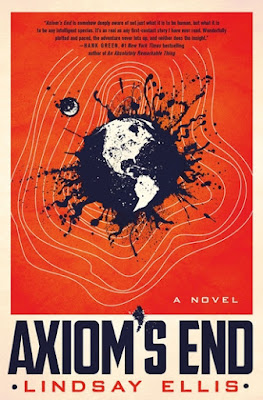 Truth is a human right.

It’s fall 2007. A well-timed leak has revealed that the US government might have engaged in first contact. Cora Sabino is doing everything she can to avoid the whole mess, since the force driving the controversy is her whistleblower father. Even though Cora hasn’t spoken to him in years, his celebrity has caught the attention of the press, the Internet, the paparazzi, and the government—and with him in hiding, that attention is on her. She neither knows nor cares whether her father’s leaks are a hoax, and wants nothing to do with him—until she learns just how deeply entrenched her family is in the cover-up, and that an extraterrestrial presence has been on Earth for decades.

Realizing the extent to which both she and the public have been lied to, she sets out to gather as much information as she can, and finds that the best way for her to uncover the truth is not as a whistleblower, but as an intermediary. The alien presence has been completely uncommunicative until she convinces one of them that she can act as their interpreter, becoming the first and only human vessel of communication. Their otherworldly connection will change everything she thought she knew about being human—and could unleash a force more sinister than she ever imagined.


With much of our society in upheaval these days, including fighting a difficult-to-eradicate source of death, social unrest and a government that is mistrusted by many, Axiom’s End by Lindsay Ellis touches on similar themes, albeit adorned in a science fiction mantle. Main protagonist Cora Sabino finds herself caught up in a heretofore unknown cover-up of an alien presence on our planet, one that involved her family and decades of governmental secrecy. Through a series of astonishing events, she finds herself in the position of being the English language interpreter for a somewhat newly-arrived alien.  Much of the earth is unknowingly facing an existential crisis, and she could be the one force in the universe that may prevent humanity’s total destruction.

Axiom’s End is an exciting thriller, not only providing a roller coaster ride of a plot, but also offering philosophical discussions about the nature of life, the importance of truth, and the power of compassion. Parallels could be drawn between the relationship of the characters in the recent Netflix reboot of Lost in Space and the characters in Axiom’s End, but the latter tale goes far deeper into the perspectives of both the alien and earthly individuals. The novel is far more mature in its examination of the interaction between the two entities.

Ellis’ writing is quite compelling, providing characters that are well-drawn and a narrative that could easily be transposed into a cinematic treatment. I pictured Chloë Grace Moretz in Cora’s role, and Eric Winter (of the show The Rookie) as Special Agent Kaplan. Cora’s aunt Luciana was embodied by Holly Hunter in my mind, Dr. Sev by actor Ben Kingsley, and Agent Vincent Park by Shawn Ashmore (also from The Rookie). As Cora’s father is an internet whistle-blower living in exile out of the country, of course I had in mind Julian Assange for his part, although I believe the book character is an American with dark hair.

For my conservative readership, some of the language does get a bit colorful from time to time. The characters are thrust into multiple circumstances of an extreme and sometimes deadly variety, and their reactions reflect that. F-bombs are a fairly common occurrence, but given the nature of the situations, it didn’t feel overly excessive to me. That said, if Axiom’s End goes on to obtain a cinematic treatment, the language is going to have to be softened to achieve the more lucrative PG-13 rating.

An overwhelming majority of the titles that I read for review are novels set in 19th century England, so delving into a world of aliens and government cover-ups was quite a detour. My screen habits tend to have a higher percentage of science fiction, however. Our household greatly enjoys the worlds of Star Wars as well as Star Trek, and the aforementioned revamped Lost in Space. This novel fit into that sensibility quite easily. I enjoyed the exciting plot, the philosophical aspects that arose between Cora and the alien force, and the compelling perspective on human/alien language differences. If linguistics is of any interest to the reader, Axiom’s End has much to offer in that regard. From its opening sentences to final lines, Axiom’s End held my attention and provided a thrilling summer diversion for this reader.

LINDSAY ELLIS is an author, Hugo finalist and video essayist who creates online content about media, narrative, and film theory. After earning her bachelor's in Cinema Studies from NYU's Tisch School of the Arts, she earned her MFA in Film and Television Production from USC's School of Cinematic Arts with a focus in documentary and screenwriting. She lives in Long Beach, California, and Axiom's End is her debut novel.