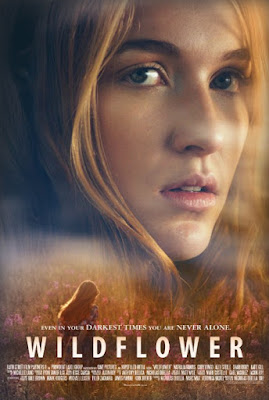 Creatively gifted, college student Chloe Moray finds solace from a difficult childhood in her extraordinary art. But when an alarming dream begins to recur nightly, Chloe starts to believe that it might be a suppressed memory and that she may have witnessed a terrible crime as a little girl. Her search for peace takes her on a journey that forces Chloe to confront her past traumas and leads her to cross paths with Josh, a young man dealing with his own painful loss. Together they find in each other someone they can trust as they seek to unlock a cold-case mystery from years before. But with the authorities blocking the way, Chloe's new-found hope is challenged in this powerful story of faith, triumph and healing.


Wildflower was a bit of a mixed bag for me. An earnest film with great messages, it also had drawbacks that were hard to ignore.  I appreciated the spotlight that was put on mental illness, as society as a whole tends to shun it or categorize it differently than other physical maladies.  The inclusion of faith into the plot wasn’t as seamless as I would have liked, but I was pleased to have it included. Christianity or belief in Something bigger than yourself is not seen as the total solution to life’s struggles, but an important step in the process of healing. This perspective was refreshing.

Not knowing much about the film before viewing it, I found myself a bit lost during the first half of the movie.  Was this a story that deals with the paranormal? Was this girl seeing dead people? Was she severely mentally ill? Or was it something more than that? It took a bit for me to settle in and just take in the story as it came.

While the narrative deals with important subjects like mental illness, sexual abuse, forgiveness and restoration, I was frequently distracted by its weak points.  The writing is very average, much as one would find in mediocre Christian fiction. The acting will win no Academy Awards, although I’m sure that holds no importance with a message-driven film like Wildflower. The casting was adequate, but the major players (the two leads in particular) looked too “pretty” most of the time. The guys always had a day’s growth of stubble (no matter what time of day) and young art student Chloe seemed to have a different outfit with every scene (how could she afford such a wardrobe?), to match her perfect makeup. Everyone’s hair was properly coiffed, highlighted and styled for just about every scene.  It just seemed too put-together for me.

Those reservations aside, Wildflower should be applauded for its efforts, and the messages it is sharing with the world.  This is made especially clear in a ten-minute featurette included on the DVD, where the hearts of the writers, producers and actors are really shown.  This project was an act of love, and there are many out in the world that would benefit from seeing it. I would not recommend it for young children due to some serious subject matter and a few spooky scenes, but this would make an excellent video to show teens.  Many are dealing with traumas or have friends dealing with such, and it can be difficult to understand. Perhaps in viewing Wildflower and discussing it later as a group, young people can begin to process some of their life struggles, or help others who are floundering. While not the perfect movie, Wildflower is a touching story of healing that many can enjoy.  If nothing else, it reminds us that even in our struggles, God can pull us out of our dark places, heal us and bring good out of trying situations. That is certainly a message worth sharing, despite the flawed form of transmission.

Icon Media has generously given me a copy of Wildflower to offer in a giveaway to my readers!  If you'd like to be entered into the random drawing, please comment below.  Comment idea:  Have you ever had a recurring dream, a family-friendly one you can share?  I still have recurring dreams that I'm in high school or college, dealing with some kind of teen or post-teen student stress!  Contest is open to U.S. entrants only this time.  I'll be shipping this one out myself. Last day to enter will be April 15th at 11:59pm EST.  Thanks!
Posted by Laura Hartness at 5:02 PM