Book Review: A Race to Splendor by Ciji Ware

From the back cover: 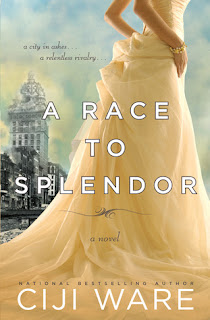 In April of 1906,
The Ground in San Francisco
Shook Buildings and Lives
From Their Foundations.


Amidst this rubble, two women find themselves pitted against each other in an architectural competition of daring, corruption, and unimaginable splendor. Fortune and power lie before them…but only for the one who wins…


Ciji Ware’s magnificent novel tells the remarkable story of rebuilding lives in the face of tragedy. From the ashes of San Francisco rises a heroine you won’t soon forget.

About a year ago I read Cottage by the Sea, also by Ciji Ware. I found it very enjoyable, so I was delighted to have the chance to read her latest work, A Race to Splendor

. And I must say, the lovely cover art also made it completely irresistible.

While I don’t rate A Race to Splendor as high as Cottage, it was still an enjoyable read. Ciji intermingles her thorough, 10-year study of the period with a well-constructed story. From the moments preceding the 1906 San Francisco earthquake, to the temblor and resulting fires, to the laborious reconstruction of the city, much transpires within April 1906 and July 1907. The main characters Amelia Bradshaw and J.D. Thayer develop quite a bit, going from adversaries with seemingly divergent motivations in life, to becoming partners in more ways than one.

I enjoyed learning about the period, and Ware does a great job in educating her readers without the writing having a textbook flavor. I had no idea that much of the damage in 1906 actually came from the post-quake fires. And while I knew there was a large Asian population in the area, I had no idea that they had been under such terrible persecution and slavery. Along with women’s rights, much has changed in the last 100 years. Yes, this was a story of the rebuilding of two beautiful San Franciscan hotels and the struggles that went along with that, but the stories of the individuals and surrounding people groups were also just as important.

A Race to Splendor is not a page-turner in the classic sense, but I found it interesting and for the most part liked the choices that Ware made in her narrative. Although I understand the viewpoint that the character Amelia had as a female architect in the early 20th century, I wish she had a more positive view of marriage. Her attitudes about trust, sexuality and matrimony were understandable; I just wish that those aspects of the character could have been different. Because of a few sexual moments within the novel (one of which was a same-sex scene), conservative readers may want to use discretion with this title.

Overall, Ciji has done quality work here. Her writing is pleasant and it’s clearly evident that she’s done her homework. The story has some devilishly nasty villains, and it’s great to see how the cast of characters grow and how long-held secrets are revealed. It’s interesting that many moments are based on true events as well. I haven’t been to San Francisco since 1979, but I hope to return one day and see some of the locations described in A Race to Splendor, particularly architectural works by true-life architect Julia Morgan. Splendor was not only an enjoyable read, but it shined a light on the period in a way that has piqued my interest. As Ciji Ware had a goal of telling the story of the post-quake rebuild from the rarely-seen woman’s point of view, she has certainly succeeded in her effort.


This title was provided to me by Sourcebooks Landmark.
No obligation other than an honest review was required.