Written in the mid 1940's, The Passionate Brood by Margaret Campbell Barnes returns to publication by Sourcebooks Landmark.  The brood mentioned in the title is that of the Plantagenets of England, a group of royal family members who love each other, yet quarrel frequently and passionately.  Of the Plantagenets, King Richard, his sister Johanna and their foster-brother Robin are the main figures of the novel.  Robin isn’t a royal, but he is considered a part of the family and counsel to many in power.  He later goes on to become a man of lore, Robin Hood.

Ms. Barnes recounts many events during the 12th century, mostly during the reign of Richard I, also known as “Richard the Lionheart”.  Brood begins before Richard becomes king, and we see many of the main characters in their days of youth.  They’re fledgling royals, still fresh and unscarred by life and battle.

The novel carries us through decades of time, as Richard is crowned, politically advantageous weddings are arranged, romance leads to years of waiting, and many passionate outbursts lead to hasty decision-making.  Somehow a few tragic incidents are redeemed with brighter outcomes, with the “creation” of Robin Hood being a prime example.  His new persona is created after he takes on a new life after a quarrel with a close friend.

The Passionate Brood concludes with the death of one of the Plantagenets.  Many other English die in battle and in other hazardous incidents.  Others endure to live another day, with many lessons learned about life.  They are harder individuals than we met in the beginning, but their life experience leads them to continue to build the country of England. 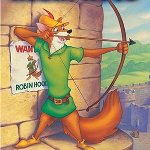 I have little knowledge of the Plantagenets, and the majority of my knowledge of Robin Hood’s character was gleaned from Disney’s and Kevin Costner’s cinematic portrayals, which I’m sure are far beyond what may have happened in that time.  So it was the Robin Hood angle that drew me in to read The Passionate Brood.

While I cannot say that I absolutely loved Ms. Barnes’ work, it was an enjoyable journey through that period and the passionate characters always kept the plot interesting.  I wish there had been more chapters with Robin present, as I really enjoyed his character.  He was wise, kind, intelligent, and attractive to many.  His ability to show restraint and at the same time present necessary dramatic force was quite admirable.

The female characters were strong, offering their opinions to the men with confidence.  They still kept their deferential places in society, however.  And while their desires, advice or demands were not always heeded, they still had a voice.  It seemed that all of the main women were greatly influenced by the desire to be with their favored romantic partner, but they also cared about the citizens around them.

Overall, The Passionate Brood was interesting, and I feel as if I got a bit of a history lesson as well.  Barnes’ writing was intelligent without being to elevated.  Chapters could not be rushed, as they required my full attention to be understood.  I would recommend this title to fans of historical fiction, yet I would not recommend it if you were looking for a fluffy book to read at the beach.  Given that Brood is being re-released during the fall, this would be an excellent choice for cozy reading on a crisp fall evening. This quality literature will be very enjoyable for those who are attracted to this genre. It is certainly quality historical fiction.

This title was provided to me by Sourcebooks Landmark.
No obligation other than an honest review was required.

Posted by Laura Hartness at 1:16 AM