DVD Review: A History of Christianity

*          *          *
Sent to me for review by TBB Media, A History of Christianity is a 6-part DVD series produced by the BBC.  The program's host is Diarmid MacCulloch, Oxford scholar and lifelong student of Christian history.  I watched Disc 1, which details the earliest years of Christianity, beginning with Paul's taking the Gospel from Jerusalem to Rome.

Diarmid is certainly well-educated, and his knowledge of Christian history seems to be quite vast.  And while he has his book knowledge, he seems to be genuinely excited about the subject he's discussing.  He presents the first years of Christianity in a factual way, in a manner that's enthusiastic but doesn't belie his own personal beliefs.  For all we know Diarmid could be a Buddhist, such is his presentation of the facts.  He seems excited, but not showing a certain bias either way. 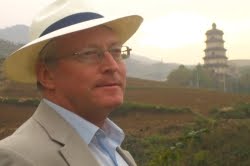 As a Christian, I found this production to be very interesting.  It really gives a glimpse at the breadth and scope of my faith's evolution and constancy over time.  This faith is shown in all it's glory and with it's warts as well.  Despite all the challenges we've had over the centuries, Christians have survived and flourished, even in the most unlikely places.

This program would be excellent for academics, but I think it would also be helpful to many laypersons to see that Christianity is not a "Western" or "American religion".  True, western society and America have added their flavor to many beliefs and traditions, but at it's core, it all goes back to Jesus and the disciples.  And they weren't from Chicago, Illinois.  They were from the Middle East.

As the BBC frequently does, the program has high production values and excellent cinematography.  In the disc that I viewed, there were no extra graphics, dramatizations or the like.  Only shots of things you would see today were shown.  Facts, simply facts.  No speculation, just showing the viewer what is out there for anyone to discover today.

The next 5 discs have the following themes:
I think my only quibble with the production is for the lack of more than one set of subtitles.  Spanish is available, but I enjoy my English subtitles and find that I usually learn more by having them on.  They would also prove to be useful for the hearing impaired.  And those of other languages would probably appreciate their texts as well-- maybe add French?

Overall, a big thumbs up to the BBC, and I hope to have the opportunity to view the remaining programs in this series.
Posted by Laura Hartness at 12:01 AM