From Finland comes the somber, touching and memorable origin story of Saint Nicholas.  We know Santa to be a character of great generosity and love, but we generally don't think about his possible childhood.  Christmas Story or Joulutarina does a masterful job in spinning this tale.

Hundreds of years ago, Nicholas is orphaned and cared for by many in his northern village. He changes homes once a year on Christmas Day.  Eventually he begins sending homemade toys to the children of the families who have cared for him over the years.  At age 13 he's taken in by a grumpy outsider named Isaac, who seems to have no love or compassion in his heart for children.

Under Isaac's care Nicholas becomes quite the carpenter, and they eventually become as close as kin. He continues giving gifts to children around the village, all the while doing it anonymously.  Then the year comes when he begins sharing toys with children from outside his village. He has a desire to bless children not only in his village, but far beyond.

There are other touching plot details that give this story depth and meaning never seen before in the Santa mythology.  I've omitted these details so that you may enjoy them as I did.

In addition to the excellent writing, the film features beautiful cinematography and an excellent soundtrack.  Although filmed in a Scandinavian language, the voices have been dubbed over in English. Some of the English-language voice actors are John Turturro (Transformers), Michael Badalucco (The Practice) and Noah Emmerich (Cellular).  If you’re like me and you also enjoy captions, none are available on the DVD.  However, I was able to engage the Closed Captioning feature on my TV.

Parents:  This film has been approved by The Coalition for Quality Children’s Media and The Dove Foundation for quality family entertainment.  The content does not include any sex, nudity, gore or profanity.  There’s not really any violence, although the Isaac character does shove young Nicholas’ head down onto a dusty table in one scene.  He also names him “Brat” at the beginning of their relationship. Those initial scenes with Isaac might be a bit disturbing for very young children, as he’s a bit harsh with Nicholas. The element of dishonesty when it comes to Santa’s identity is also a minor issue.  Pairing these and a few other intense (but not terrible) thematic elements with very few incidents of smoking, and the movie has earned a ‘PG’ rating. 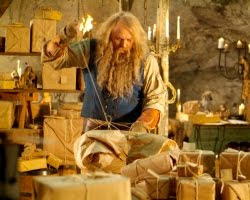 The running time of the film is about 70 minutes, and there is a 20 minute featurette in the Special Feature section.  This piece is not overdubbed and you’ll need to read the subtitles.

While there aren’t many moments of levity in this film, I would not characterize it as depressing.  It’s a rich tale, one that should have been told years ago.  The power of love, compassion and sharing is evident, transforming the lives of those in Nicholas’ life.  Hopefully many will emulate Nicholas, loving the unlovable and even sharing blessings with those who haven’t been a blessing.  Truly, the message of unconditional, grace-filled love is at the very core of the true meaning of Christmas.

This product was provided by the Amazon.com Vine reviewers program, from which I am receiving no monetary compensation.