Book Review and Giveaway: The Other Mr. Darcy by Monica Fairview 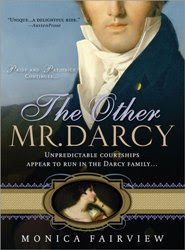 Okay, I have to admit it.  I'll read just about any novel that's Jane Austen themed. But this one had me particularly intrigued, because I love the Darcy character and in addition to that, I loved the cover art. If only all good books could be determined by the quality of the cover art-- it would make things so much easier!

Monica Fairview's The Other Mr. Darcy is a Pride and Prejudice sequel, speculating on the days following the marriage of Mr. Fitzwilliam Darcy and Elizabeth Bennet.  As we recall in the first story, Charles Bingley's sister Caroline had eyes for the dashing and well-bred Darcy.  Despite her flattery and hopes, the man of her dreams chooses to wed Elizabeth, a woman for whom she has held no high esteem.

Enter Mr. Robert Darcy, Fitzwilliam's American cousin.  In town to attend the wedding, he accidentally witnesses the presumed private meltdown of Caroline, distraught over her shattered dreams to wed Darcy.  Embarrassed that he witnessed her in such a vulnerable moment, she quickly comes to resent him.  It's very reminiscent of a moment between Scarlett O'Hara and Rhett Butler in Gone with the Wind.  And so begins the dance that is their relationship, culminating in an ending that Caroline herself never would have thought possible.

The Other Mr. Darcy was very enjoyable to read.  Monica's style of writing is elegant and true to the culture of the times.  I gained some new vocabulary words in the reading of this novel! Yet at the same time, it was unstilted and entertaining.  There's humor, suspense and of course, romance.  While some of the plot choices made some of the outcomes obvious, it was still a fun ride, seeing where Ms. Fairview would take the characters.

It did take me some time to accept this particular incarnation of the Caroline character, though.  She was so haughty in Pride and Prejudice, and there were times in this story when I found some of her amiability to be a bit unbelievable.  But the benefit of this comes in the redemption of the character, for whom most Prejudice fans have held contempt.  In anycase, Her sister Louisa does a great job of handling the haughty attitude for her. 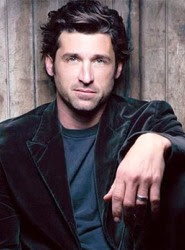 I highly enjoyed the character of Robert, for he had all the traits of a Darcy without the stiffness of Fitzwilliam.  With his dark, wavy hair and blue eyes, I imagined Patrick Dempsey as an actor who could portray him.  He was earnest and dashing, while still retaining the airs of a proper Bostonian gentleman.

And on a philosophical note, a line near the end of the book really touched my heart. To paraphrase it without giving anything away, Robert says, "We cannot know where the eye of God lies, but if we stood where He stands, things that seem to be lop-sided to us would be absolutely perfect."  An excellent message to take away after reading a highly enjoyable book.  Thank you, Monica.

Thanks also to Sourcebooks and Grace at Books Like Breathing for hosting the initial giveaway for this book.  I enjoyed it very much, but now I'm going to pass it on to another lucky reader!  Don't worry, I've handled it with care and it's in good condition.


For bonus entries now that you're a follower... be sure to mention the ones you've completed in your comment: