Book Excerpt and Launch Giveaway Package: The Siren of Sussex by Mimi Matthews 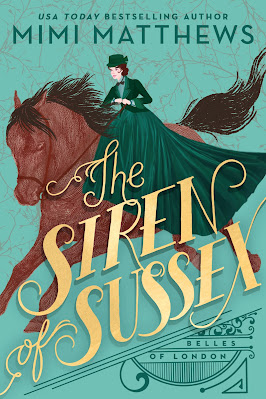 Victorian high society’s most daring equestrienne finds love and an unexpected ally in her fight for independence in the strong arms of London’s most sought after and devastatingly handsome half-Indian tailor.

Evelyn Maltravers understands exactly how little she’s worth on the marriage mart. As an incurable bluestocking from a family tumbling swiftly toward ruin, she knows she’ll never make a match in a ballroom. Her only hope is to distinguish herself by making the biggest splash in the one sphere she excels: on horseback. In haute couture. But to truly capture London’s attention she’ll need a habit-maker who’s not afraid to take risks with his designs—and with his heart.

Half-Indian tailor Ahmad Malik has always had a talent for making women beautiful, inching his way toward recognition by designing riding habits for Rotten Row’s infamous Pretty Horsebreakers—but no one compares to Evelyn. Her unbridled spirit enchants him, awakening a depth of feeling he never thought possible.

But pushing boundaries comes at a cost and not everyone is pleased to welcome Evelyn and Ahmad into fashionable society. With obstacles spanning between them, the indomitable pair must decide which hurdles they can jump and what matters most: making their mark or following their hearts?

I'm excited to present the first novel of 2022 (for this reader), Mimi Matthews' The Siren of Sussex. My review will be coming up next week, but for today I offer a taste of the novel in the form of an excerpt. This Janeite is very pleased to see one of Miss Austen's books mentioned!
I also wanted to alert my readers to a fabulous launch giveaway that Mimi is hosting, to give you a chance to enter as soon as possible! Enjoy the excerpt to follow, and be sure to fill out the Rafflecopter widget to enter the contest. Giveaway is hosted by Mimi Matthews, so the winner will be chosen, announced and administrated by her. US Mailing addresses only. Good luck to all, and happy pub day to The Siren of Sussex!

Excerpt: The Siren of Sussex

A surge of disappointment dimmed Evelyn’s smile. It occurred to her, quite suddenly, how little she knew about him.
Of course, he must have a sweetheart. Heaven’s sake, he was probably married! Just because he didn’t wear a wedding band didn’t mean he didn’t have a wife—and probably several children besides. It was none of her affair.
She turned back to the shelves. “In that case . . . What about a romance?”
“No romances,” he said darkly.
“No?” Was he one of those stuffy men who disapproved of romance novels? Many did. Even so, she’d expected better of him. A man who designed clothing so beautifully shouldn’t be averse to sentiment. “What about this one, then? Silas Marner. It only came out last year.”
Mr. Malik drew it from the shelf. It was bound in brown cloth with gilt lettering on the spine. “What’s it about?”
“An individual and his place in society. The hero of the story is a weaver. A man with no family to speak of, who keeps himself apart from his community.”
“A bit too close to home.” He returned the book to the shelf. “She needs something bright. Something to boost her spirits.”
Evelyn wondered why. Was she ill? Melancholic? Had she had some sort of disappointment? “In that case” —she reached for a Jane Austen novel— “I recommend this one.”
He took it from her, giving the title a dubious glance. “Northanger Abbey.”
“It’s Miss Austen’s satire of a Gothic novel. A vastly entertaining read. It should take her mind off whatever it is that’s troubling her.”
Mr. Malik thumbed through the pages. His expression was doubtful.
“I confess,” she said “there is a romance in the story, but it’s witty rather than mawkish. I can’t imagine she won’t enjoy it.”
“It’s still a romance.”
A cough sounded nearby, along with the thump of books being shoved back on a shelf. It was a reminder that she and Mr. Malik weren’t alone. Far from it. The shop seemed to be growing busier.
Evelyn sunk her voice. “What does she have against romance?”
“Nothing,” he replied, his tone equally low. “I just don’t want her to get any ideas.”
“Ideas about what?”
“About happily-ever-afters.”
The wide swell of Evelyn’s skirts brushed his leg. She belatedly realized that she’d drawn closer to him. That their conversation had taken on an air of intimacy. “You object to them?”
“I don’t believe in fairy tales,” he said.
She gave him an amused look. “Is that what they are?”
“In my experience.”
“How illuminating.”
“Is it?” He turned another page.
“Indeed. You’re a cynic, Mr. Malik. I wouldn’t have thought it.”
“I’m a realist.”
“Happily-ever-afters are real. For some people, at least. And even if they weren’t . . . A little romance never hurt anyone.”
His eyes lifted to hers. There was an expression in them that was hard to read. “You think not?”
Butterflies unfurled their wings in her stomach. The same feeling she’d had when she’d first touched his hand. A fluttering, breathless sensation. As if her corset had been laced too tightly. “No,” she said. And then she thought of Fenny. “Not in a novel, anyway.”
His mouth curled into the barest hint of a smile.
Once again, she had the unsettling sensation that he could read her mind. She took a step back from him. “Forgive me, but I mustn’t linger. My maid is waiting for me.”
He closed the book, clutching it in his hand. “Thank you for your help.”
“It was my pleasure. I hope your . . .”  Wife? Sweetheart?  “I hope she enjoys the story.”
“My cousin.”
Evelyn nearly stumbled in the process of taking another step backward. “I beg your pardon?”
“The book is for my cousin.”
His words penetrated before she could school her features. She was certain an expression of relief passed over her face.
She was equally certain that he saw it.
Heaven only knew what he must think.
“Your cousin. Well, that’s . . . that’s splendid.” Splendid? Evelyn’s eyes closed against a swell of embarrassment. She was quite ready to disappear into a hole in the earth. She took another step back.
“Please convey my regards.”
His smile broadened. “I shall.”
From THE SIREN OF SUSSEX published by arrangement with Berkley, an imprint of Penguin Random House LLC. Copyright © 2021 by Mimi Matthews. 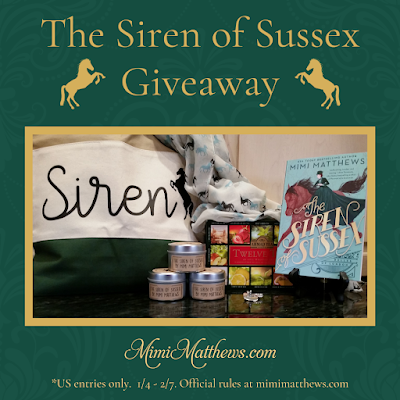 Mimi is starting the celebration of the release of The Siren of Sussex with a curated giveaway that we hope you will love.⠀
⠀
With her hero and heroine in mind, Mimi selected items that reflected their love of fashion, horses, and tea!⠀
⠀
The Siren of Sussex Giveaway package includes:
The winner will be announced on Mimi's blog - mimimatthews.com – at 8:00 pm Pacific time on 2/8/22.
The giveaway is open from 12:01 am Pacific time 1/4/22 until 11:59pm Pacific time on 2/7/22. US Mailing addresses only. Enter via the Rafflecopter widget below, which is linked to Mimi's website.

Paperback
Kindle
Audiobook
Posted by Laura Hartness at 12:00 AM