Book Review: Back to the Bonnet by Jennifer Duke 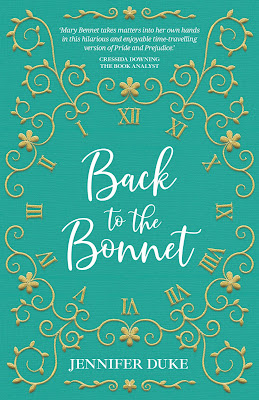 "Oh really, Miss Mary!" He lowered his voice and leant closer. "Does convention hold you back? You who deny all conventions of time, twisting it into its proper course?"

Uncover the secret life of Mary Bennet and the extraordinary adventures you had no idea were hidden between the lines of Jane Austen's classic tale.

Matrimony is not a destiny that attracts plain but clever Miss Mary Bennet.

With her family’s fortunes threatened by their own foolish mistakes, deceptive rogues and the inconvenience of male heirs to her family home, the future looks unstable, even bleak. But Mary possesses a secret weapon . . . a bonnet that allows her to travel in time.

In orchestrating events according to her own inclinations, Mary takes an unconventional route to protect her family from ruin. However, she is unprepared for the dark path down which duty and power will lead her.

Some of my favorite tales from movies and literature include time travel. The Outlander series, The Time Traveler’s Wife (the book, not the movie), Somewhere in Time/Bid Time Return, and Back to the Future are just a few titles which come to mind. In each case, the plausibility of the “science” or magic behind the time traveling is not crucial. The story and overarching narratives carry more weight in my opinion of a piece. Can one truly walk “through” ancient standing stones to 18th century Scotland? Shall we one day find ourselves riding in souped-up DeLoreans at 88 miles per hour into another era? If time travel does become possible, it most certainly won’t be via those mechanisms. And yet, fans of those tales are able to enjoy them because they accept their premises. After this, we move on to the story itself and are amused with the repercussions of those travels through time.

In her novel Back to the Bonnet, author Jennifer Duke does not employ the use of a DeLorean for time travel. Instead, the mode of transport comes in the form of a well worn, out of fashion bonnet set in the world of Jane Austen’s Pride and Prejudice. If that premise has you grimacing rather than giggling, then Back to the Bonnet is not for you. It is for similar reasons that I myself have avoided reading Austenesque fiction that involves zombies or aliens, for example. I’m just not going to buy into those stories. But manipulating the embroidery of a bonnet, stitch by stitch to add or subtract time? Sure! Why not? Yes, it’s absurd, but it’s my kind of absurdity!

Pride and Prejudice is arguably Austen’s most popular novel, and the less-popular character of Mary Bennet is often overshadowed by the beautiful Jane, the tempestuous Lydia, or the protagonistic Elizabeth. In Back to the Bonnet, Mary takes center stage after haphazardly inheriting a magical bonnet that can transport its wearer through time. Through this device, Miss Bennet is able to right wrongs that readers of Austen’s work have never been privy to in the past. Mary’s choices aren’t flawless however. She stumbles at times and learns that she cannot control all aspects of her loved ones’ fates. Along the way however, readers will be treated to an amusing speculation of what “would have been” if the characters of Pride and Prejudice had made different choices, or if Mary had not been secretly working behind the scenes to give destiny a little “nudge”. In Jennifer Duke’s world, the dowdy, almost ignored Bennet sister becomes a powerful force working to ensure the happiness and security of the entire family.

While not my favorite time travel story of all time, Back to the Bonnet was a diverting read to take in during my summer break. There are also some additional, amusing fantastical elements that are revealed as the story progresses, but I will not divulge them here and spoil the fun. I would simply advise to once again “go with it” when surprising features of the bonnet are discovered, and just be entertained!

For my conservative readership, I would say that in general the content here is appropriate for most audiences. Mary does have a closeted gay friend who knows her secret, and I picked up on some possible same-sex attraction between two female characters as well. These aspects are not thoroughly explored, however. Also, while some characters do use colorful language, Duke has chosen the literary device of printing merely the first letter of certain words, plus an em-dash. I haven’t seen this writing choice in a while, and I appreciated its usage.

My two sharpest criticisms are minor. Without giving away special details about the bonnet, I will say that there were times when I briefly became confused about the identity of speakers in a dialogue, and/or their current location. This probably will not make sense to those who have not read the book, but I would just suggest that as you are reading, take careful note of who is speaking and from where. My second critique comes in some decisions that Mary feels she has to make near the end of the story. Although I understood her reasoning for doing what she did, I found her actions to be wholly inconsistent with her character in general. However, in the spirit of just “going with” the story, I chose to accept those decisions as well. We have a time-traveling bonnet, for goodness sake!

Again, fans of lighthearted time traveling tales will find much to enjoy in Back to the Bonnet. Jennifer Duke has taken her readers on a fun dive into the world of Pride and Prejudice, showing us not only what “could have been” but also behind the scenes secrets never before revealed. I will certainly never look at embroidered bonnets in the same way again. They will bring a smile to my face and a fanciful wish for the power to travel as Miss Mary Bennet did in Jennifer Duke’s Regency England. 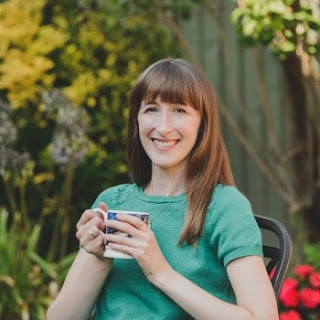 Jennifer Duke grew up in Basingstoke – a town in Hampshire, England, which Jane Austen visited for shopping and balls when her family lived in the nearby village of Steventon. Loving stories from a very early age and being the second of four sisters, Jennifer delighted in reading stories to her younger siblings.

She has had many jobs – including coffee barista, trainee English teacher, nursery nurse, nanny, housekeeper and dog walker – but kept returning to writing fiction.

A longstanding love of Jane Austen’s novels led to her first published novel Back to the Bonnet.

As well as writing, she is interested in mindfulness, environmental issues and painting. She loves animals, history, art, travel and being out in nature. Currently she is working on a fantasy novel inspired by ancient art at Chauvet-Pont d’Arc cave in the south of France, a story set 35,000 years ago – a slight change from Regency England! She also has plans to write a post World War II romance inspired by Jane Eyre. 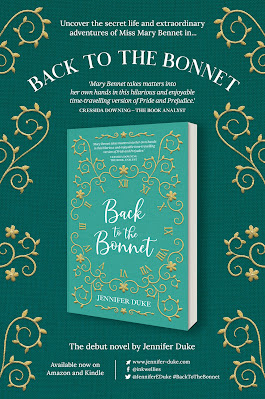 US Links:
Kindle (Free on KU!)
Paperback
Posted by Laura Hartness at 7:38 PM