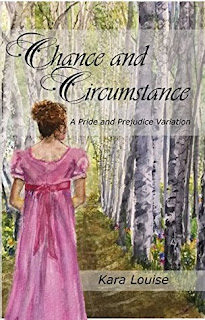 Today I'm pleased to be hosting Kara Louise, whose novel Darcy's Voyage holds the position of "Best Austenesque Fiction Novel" in my heart, going back to 2010 when I discovered it. She has a new novel out now called Chance and Circumstance, which she will discuss with us here.  Thanks for this very enlightening blog post Kara!  To our readers: Be sure to enter the giveaway at the conclusion of the post!

Inspiration by the Seat of My Pants

I want to thank Laura for allowing me to share with you about my newest book, Chance and Circumstance, and a little bit about how I write.

When people ask me what method I use in writing my stories, I have to confess that I am a pantser. If you don’t know what that means, it means I write by the seat of my pants. I’m not a plotter - I don’t plot everything out ahead of time; I don’t make up outlines; I often don’t know the direction a story is going to go until I get into it. I start with a premise and go from there.

One reason I prefer this way is that as I write, I find myself more drawn into the story and have a better sense of where the characters are taking me. Yes, they do tend to often have minds of their own.

While I have a general idea of what I’m going to write and what the general plot (or variation) is going to be, I do make every effort to bring it all together in the end and be an enjoyable read.

Chance and Circumstance is my eleventh published book, and all I knew when I began was that I was going to examine what would have happened if Mr. Bingley met Elizabeth first, without Jane or Mr. Darcy around.

Here is the book description:

Chance brings about an early encounter between Charles Bingley and Elizabeth Bennet soon after his move into Netherfield. He soon begins to favour this pretty and lively young lady. Circumstances have kept Jane Bennet and Mr. Darcy from the neighbourhood, thereby changing the events that Jane Austen penned in "Pride and Prejudice."

When Mr. Darcy finally arrives, will he be able to keep from interfering when he meets this young lady his friend so greatly admires? When Jane returns from touring the Lake District with her aunt and uncle, will the young gentleman who returns with her prove to be better suited for her than Mr. Bingley ever was?

In this "Pride and Prejudice" variation, chance and circumstance greatly affect the way several of Jane Austen's characters arrive at their happily ever after, but not necessarily in the way you think.

I am of the conviction Mr. Bingley’s and Elizabeth’s initial meeting would go well, as they have lively and engaging personalities, are very polite and agreeable, and are both attractive. I wanted to see how long it would be before Elizabeth began to see those areas in which this fine gentleman would not be suitable for her.

My very first inspiration for this story came from a scene I envisioned many years ago. In that scene, Bingley is walking at Elizabeth’s side, and Darcy and Jane are following. Darcy is frustrated that his friend is singling out Elizabeth because he thinks she is better suited for him. Bingley, who has begun to question his feelings for Elizabeth, keeps turning around to look at Jane, who in turn, returns his looks of admiration. Elizabeth is simply enjoying her walk.

That was the scene I had envisioned, but guess what! It did not make it into the book because a very different idea came to me as I began writing. I had to get Jane away from Longbourn and determined that if Jane Austen wrote that the Gardiners were going to take Elizabeth to the Lake District the following year (and we know what happened to those plans!), perhaps they took Jane the previous year. So I wrote that Jane is visiting the lakes with the Gardiners when Bingley moves into Netherfield.

But wait! Where did this new thought just come from? Jane has met a young man while up there and seems quite taken with him! I had not originally planned that at all!

In the very first chapter of the story, the Bennets receive a letter from Jane in which she informs them she met some long-time friends of the Gardiners, and they are going to stay longer in the Lake District. She writes another letter to Elizabeth however, giving a little more information. She tells her about this gentleman, who is the son of these friends, and how he has stolen her heart. This was another twist that happened as I was writing, and it surprised even me.

One thing I love is when a minor element from Jane Austen’s novel finds its way into my story. This happened a few times in Chance and Circumstance. The first is what I just mentioned, that the Gardiners may have taken Jane to the Lake District because we know they were going to take Elizabeth. (And perhaps all the girls would get their chance when they are twenty years old, as the younger sisters discuss in my novel.)

The second element plays a major part in one of the twists of my story. Jane Austen tells us of Bingley’s tendency to write letters that are brief and not well blotted, causing much of his correspondence to be unreadable. You’ll have to read the book to discover more about the importance of this unreadable letter he writes!

Thank you, Jane Austen, for allowing me to take advantage of these minor elements from your story and put them in my story to cause a little angst!

There are other twists and turns in the story (particularly at the end) that I hope will keep you engaged as you read. It was a fun adventure for me to write, as well!

I posted about half of the book online, and you can begin reading it at the link below.

Thanks to Kara for offering a giveaway copy of Chance and Circumstance!  If you'd like to enter, please utilize the Rafflecopter widget below. If the winner is from the U.S., they may choose either a paperback or Kindle copy.  If the winner is international, their edition will be the Kindle version.  The contest period will conclude at 12am EST on Saturday, December 16, 2017. 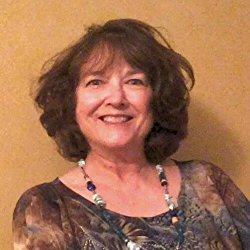 
Kara Louise has been writing Jane Austen variations since 2001 and has published 11 novels. She grew up in the San Fernando Valley in Southern California, but now lives in the suburbs of St. Louis, Missouri with her husband, and their ever-changing number of dogs and cats. In addition to writing, she enjoys spending time with their son and his wife and their two granddaughters, who live nearby.