Review and Giveaway: The Other Einstein by Marie Benedict 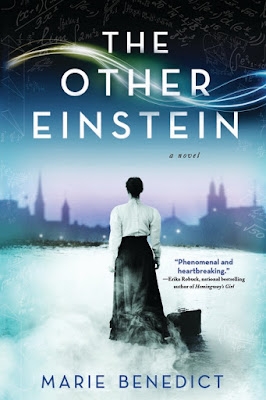 In the tradition of The Paris Wife and Mrs. Poe, The Other Einstein offers us a window into a brilliant, fascinating woman whose light was lost in Einstein's enormous shadow. This is the story of Einstein's wife, a brilliant physicist in her own right, whose contribution to the special theory of relativity is hotly debated and may have been inspired by her own profound and very personal insight.

Mitza Maric has always been a little different from other girls. Most twenty-year-olds are wives by now, not studying physics at an elite Zurich university with only male students trying to outdo her clever calculations. But Mitza is smart enough to know that, for her, math is an easier path than marriage. And then fellow student Albert Einstein takes an interest in her, and the world turns sideways. Theirs becomes a partnership of the mind and of the heart, but there might not be room for more than one genius in a marriage.

Like many in our society, when I hear the name "Einstein", my thoughts immediately go to the Nobel prize-winning intellectual with wiry hair and revolutionary theories of how our universe is held together. Through Albert Einstein's studies, the understanding of time itself has been altered irrevocably. In Marie Benedict's novel The Other Einstein, we are given a peek into the personal life of such a revered figure, and come to see him for the human he truly was. Not only that, Benedict gives voice to that of Albert's first wife, Mitza Maric, an accomplished student of physics in her own right, whose perspective has largely been unrevealed, until now.  Through thorough research and a bit of artistic license, Marie Benedict crafts a sweeping tale of a remarkable woman who traverses the difficult waters of academia in the late 19th and early 20th centuries.

Mitza Maric was not a typical woman of her era.  Beset with a limp as well as a keen intellect, it was assumed by her father that she would go on to never marry, yet also achieve things most women would not.  Given an excellent education, she eventually finds herself in class with none other than Albert Einstein, who at the time was just another physics student like herself. Charming and keenly smart, they become friends and later, lab partners.

At this point in the story, I expected a typical boy-meets-girl, boy-loses-girl, boy-regains-girl type of narrative, albeit infused with occasional mentions of physics, mathematics, and even a bit of philosophy.  Fortunately, I was ignorant of Mitza's biography, so I was taken by surprise at the course her life took.  I won't reveal the extent of her journey and transformations, but suffice it to say, they were remarkable.  Marie Benedict's writing was effortless and had me quickly upending pages to determine where Mrs. Einstein's life would end up next. As a Christian I appreciated Mitza's interest in finding God's hand within mathematics and physics.  As a wife and mother I was heartbroken over so many of the trials she had to face.  Mrs. Einstein was a truly unique character, yet she had many aspects of her personality that I found imminently relatable.

The Other Einstein was a compelling and thought-provoking novel, one that I read in just a few sittings. The chapters flew by quickly, and I was almost sad to see them end.  I wish that there had been a bit more about Mitza's life in her latter days, but I understand that Benedict was doing her best to stay true to history, and I assume there isn't much material related to those later years.  I also enjoyed the romantic early days of the Einsteins', and appreciated the fact that intimate details were kept to a minimum.  A steamy love scene or two could have easily been inserted into the plot, but Marie's writing is strong enough that such material wasn't needed. Although there are adult situations in her story (and one mere curse word that I can recall), The Other Einstein would make an excellent read for my conservative readers, as well as those with even a mild interest in science or mathematics.

A few years ago I read another book of Marie Benedict's, Brigid of Kildare, written under the name Heather Terrell.  While I enjoyed that novel, I think I relished The Other Einstein even more.  I applaud Marie in her continuing work, and give her latest novel an enthusiastic recommendation.

Sourcebooks has generously offered a giveaway of three copies of The Other Einstein! Utilize the Rafflecopter widget below and enter to win.  Good luck!  Also take note of the Kindle sale that's going on this week (see graphic below).  If you prefer the ebook edition, now's a great time to grab a copy! 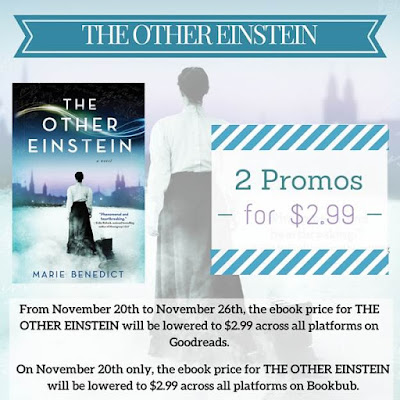