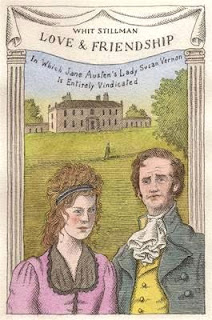 Whit Stillman has taken Austen’s never-finished epistolary novella, Lady Susan, reimagined it as a straight narrative, and added the hilarious new character of Rufus, Susan’s apologist nephew, who aims to clear Susan’s good name come hell or high water (even if he is doing it from "the ignoble abode" of debtors’ prison ). Despite many indications to the contrary, Rufus insists that Susan is, “the kindest, most delightful woman anyone could know, a shining ornament to our Society and Nation.” Rufus then appends his earnest tale with a collection of his aunt’s letters, which he claims have been altered by Austen to cast the estimable Lady Susan in a bad light.

Impossibly beautiful, disarmingly witty, and completely self-absorbed, Lady Susan Vernon, is both the heart and the thorn of Love & Friendship. Recently widowed, with a daughter who’s coming of age as quickly as their funds are dwindling, Lady Susan makes it her mission to find them wealthy husbands——and fast.

But when her attempts to secure their futures result only in the wrath of a prominent conquest’s wife and the title of “most accomplished coquette in England,” Lady Susan must rethink her strategy.

Unannounced, she arrives at her brother-in-law’s country estate. Here she intends to take refuge——in no less than luxury, of course——from the colorful rumors trailing her, while finding another avenue to “I do.” Before the scandalizing gossip can run its course, though, romantic triangles ensue.

With a devoted Austenian sensibility and absurd theological commentary, filmmaker and writer Whit Stillman ingeniously reimagines and completes one of our greatest writers’ unfinished works. As much homage to its muse’s perennial influence as testament to its author’s brilliance, Love & Friendship is a sharp comedy of manners, and a fiendishly funny treat for Austen and Stillman fans alike.

Love & Friendship brings a healthy helping of scandal, along with lots of laughs, to Georgian and Victorian London. Whit Stillman has also created a film version of Love & Friendship, starring Kate Beckinsale and Chloe Sevigny, opened in select theaters on May 13th.

Like many fans of Jane Austen, I’m happy to see most Austenesque films come to the cinema (with Pride and Prejudice and Zombies being an exception).  When I learned of Whit Stillman’s cinematic and literary adaptations of Austen’s Lady Susan, I was thrilled!  Ashamedly, I’d never read the original epistolary novel and set about tending to that task straightaway.  As it was an unfinished work, I don’t know that Jane intended for this version to be the final edition, so I wasn’t entirely surprised when I was not overcome with enjoyment of this title.  I found it odd and sometimes hard to follow.  That being said, I’m glad to have read it, and especially glad to be somewhat familiar with the source material before taking in Stillman’s version, Love & Friendship.

In this new publication, the novel is a short piece of about 150 pages, followed by a reprint of Austen’s original work.   I actually began reading on page 155, wanting to read Lady Susan first, as mentioned. In addition to her text, Stillman has supplemented it with commentary from “Rufus”, a nephew who is bound and determined to rebut almost everything that “the spinster authoress” Austen has to say about Lady Susan Vernon.  Stillman’s character in a sense is “real”, and Austen has done a “libelous” work in besmirching the also “real” Lady Susan.  It’s an interesting literary device that is ripe for humor and amusement.

After reading Austen’s words with Stillman’s commentary from “Rufus”, I went on to read Love & Friendship.  How amusing this story is!  In a Facebook post I referred to Lady Susan as a “hot mess”, and that she is!  Gloriously beautiful despite her advanced age (!) of the mid-30’s, she is also hopelessly prolific in all of her manipulative ways.  She has had more than one man wrapped around her little finger in her time, and she knows how to handle them in such a way to get what she wants.  She has her enemies, but there are also many who fawn over her in admiration.  She claims to adore her daughter Frederica, but she seems more concerned about either having her away or marrying her off as soon (and as well as) possible. The widow Lady Susan’s main interests seem to lie in continuing to live in the luxury to which she had become accustomed prior to her husband’s death, and ensuring the security of her daughter as well.  At the same time, she loved to skirt the lines of propriety, having a reputation for being an outrageous flirt, to both bachelor and married men alike.  The dance that she seemed to be performing in society was occasionally dizzying, and I marveled at the characters as they spun around her, sometimes completely unaware of her maneuverings.

I found myself highlighting a number of passages in this amusing tale, and I just have to share some of them:

“Perhaps we all have a spinster authoress in our lives, even if just that inner demon which mocks and denigrates all we do.”

“That’s the parent’s lot! We bring these delightful creatures into the world-- eagerly, happily-- and then before long they are spying upon and judging us, rarely favourably. Having children is our fondest wish but, in doing so, we breed our acutest critics. It is a preposterous situation-- but entirely of our own making...Of course when the little ones are very small there's a kind of sweetness which partially compensates for the dreadfulness which comes after..."

“Among the habitually malicious, kindness and gentility are often mistaken for simple-mindedness.”

“’Imitation is the sincerest form of flattery.’ No, not at all, it is not the sincerest. That would be mocking contempt and physical battery—a lesson I learned, rather painfully, over a number of years.”  (I don’t agree with all of these quotes—I just find many of them incredibly amusing in some of their absurdities.

“Those who fall from virtue first cause injury, then cast blame.”

“This often happens: The individual who identifies a truth earlier than others is then bitterly mocked by those attached to erroneous convention.”

These are just a few moments of Whit Stillman’s wit that I enjoyed very much.  His writing is clear, yet seems very faithful to the tone of other 19th century authors like Austen.  He has taken her writing and turned it on its ear somewhat, but he has done a masterful work.  I encourage readers to follow my lead—read Lady Susan first, and then enjoy what Stillman has done with his retelling. While short and sweet, Love & Friendship was a delight, and I eagerly anticipate viewing the cinematic version as well.  Oh to see the lovely Kate Beckinsale in this delicious role—I can only imagine how fun this will be! 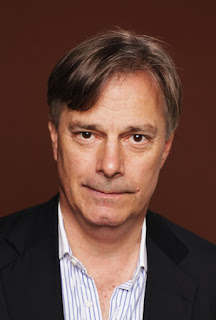 Whit Stillman was born in Washington, D.C., and attended Harvard, where he was an editor of the Harvard Crimson before working in book and magazine publishing. He has written and directed five films, including the award-winning Metropolitan, Barcelona, The Last Days of Disco, and Damsels in Distress, as well as the TV show The Cosmopolitans. His first novel, The Last Days of Disco, won the 2014 Prix Fitzgerald. He has written for the Wall Street Journal, Harper's, The Guardian, Vogue, and other publications. Visit his unofficial website for updates on this latest Amazon series The Cosmopolitans, and follow him on Twitter as @WhitStillman and on Facebook.

Award winning writer-director-filmmaker Whit Stillman tours the blogosphere June 13 through June 24, 2016 to share his latest release, Love & Friendship: In Which Jane Austen's Lady Susan Vernon Is Entirely Vindicated. Thirteen popular book bloggers—card carrying Jane Austen fans one and all—will feature interviews, book excerpts and reviews of this highly acclaimed novel. A fabulous giveaway contest, including hardcopies of the book will be open to those who join the festivities.


In celebration of the release of Love & Friendship: In Which Jane Austen's Lady Susan Vernon Is Entirely Vindicated, Mr. Stillman’s publisher, Little, Brown & Co has kindly offered a chance to win one of three hardcover copies of the book!

To enter the giveaway contest, simply leave a comment on any or all of the blog stops on the The Love & Friendship Janeite Blog Tour starting June 13, 2016 through 11:59 pm PT, June 30, 2016. Winners will be drawn at random from all of the comments and announced on Austenprose on July 1, 2016. Winners have until July 07, 2016 to claim their prize. Shipment is to US addresses. Good luck to all!

Posted by Laura Hartness at 3:15 PM