Lady Catherine de Bourgh is prepared to be very generous when it comes to medical care for her sickly daughter, Anne – generous enough to lure noted physician Dr. Thomas Bennet to give up his London practice and move his family to Rosings Park. But his good income comes with a price: complete dependence on his demanding patroness’s every whim.

Now the Bennet family is trapped, reliant on Lady Catherine for their survival. Their patroness controls every aspect of the Bennet household, from the shelves in the closet to the selection of suitors for the five Bennet daughters. Now she has chosen a husband for headstrong Elizabeth Bennet– Mr. George Wickham.

But Lady Catherine’s nephew, Fitzwilliam Darcy, is not so sure about his aunt’s choice. He is fascinated by the compassionate Elizabeth who seems to effortlessly understand everyone around her, including him. Lady Catherine has other plans for Darcy, though, and she forbids Elizabeth to even speak to him.

As Anne’s health takes a turn for the worse, Darcy and Elizabeth are thrown together as Dr. Bennet struggles to save Anne’s life. Darcy can no longer deny the truth – he is in love with Elizabeth Bennet. But Lady Catherine will do anything to stop Darcy from marrying her – even if it means Elizabeth will lose everything she loves. 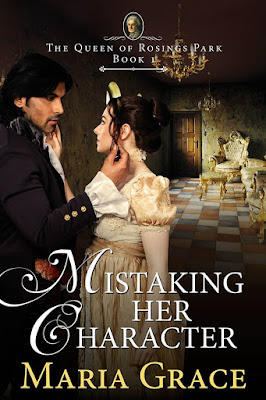 Author Maria Grace returns to the world of Austenesque fiction in her latest novel, Mistaking Her Character. As in the original Jane Austen novel Pride and Prejudice, we find Lady Catherine de Bourgh wielding strong command over the grand Rosings Park estate and all who are associated with it. Her daughter Anne is as sickly as a Janeite could imagine, but becomes more afflicted as the story progresses. Maria Grace’s departures from the original text include assigning the profession of medical doctor to Mr. Bennet, and the role of stepmother (to some of the Bennet girls) to Mrs. Bennet. However, Wickham remains a cad, Jane a delight and Mr. Collins the supreme adulator to his benefactress, so on the whole, most remain true to their original characteristics.

As Anne’s health further declines, Dr. Bennet and Elizabeth are needed in increasing measure for medical care. While at Rosings, Elizabeth becomes acquainted with Fitzwilliam Darcy and becomes attracted to this dashing, powerful heir of Pemberley. The quandary is, Lady Catherine still insists that he will ultimately marry Anne, for shrouded reasons that are revealed later in the novel. Her domineering nature is even stronger in Mistaking Her Character, and this temperament begins to manifest itself in Anne as well. Before long, it seems that the lives of Elizabeth, Darcy, Dr. Bennet and others will be completely entwined about the fingers of the De Bourgh women. They are insistent, powerful, selfish and unsympathetic to those around them.

On the whole I greatly enjoyed Mistaking Her Character. I appreciated how Maria Grace retained most of Austen’s characterizations, so I was a bit disappointed that Darcy was seen to be so agreeable, so early in Elizabeth’s eyes. It seemed that they became enamored with each other in a much quicker fashion than in Pride and Prejudice. This isn’t a problem, but I always enjoy the tension between them before they ultimately come together. However, there is enough tension to go around in this story—perhaps adding more friction between the lead characters would have been too much.

I was also surprised at the personalities of Elizabeth and her father. She allowed herself to be excessively oppressed for far too long, in my opinion. She did prove to be a strong woman of substance, evidenced by the fact that Dr. Bennet would permit no other daughter to attend him while he worked. He knew she had the constitution for blood, other bodily fluids and medical emergencies, unlike her sisters. Elizabeth does have the capacity to stand up to Lady Catherine, as seen in the confrontation that inspired the book’s title. However, I felt that she spent an inordinate number of days without asserting herself, way too much time in silent misery because of her situation. It seemed inconsistent with her true nature.

Part of this was perpetuated by her love for her self-centered, despicable father and her desire to obey him. His need to genuflect to Lady Catherine becomes paramount, and he behaves badly toward Elizabeth, justified by his loyalty to Catherine. When plans go awry, he lays blame at Elizabeth’s feet far more often than is reasonable. While I agree that the original Mr. Bennet wasn’t the best father in the world, this iteration of him in Mistaking Her Character goes far beyond that failing. Unlike my opinion about Elizabeth, this observation of Dr. Bennet isn’t a negative criticism; it just gives the character a different flavor.

I think my only other negative criticism would be in the length of time the story hovers over Elizabeth’s period as nursemaid to Anne. It seemed significantly long to me, and I felt that the plot dragged during that substantial portion of the start of the novel. The De Bourghs’ dominance over those around them was fatiguing. However, as the story progresses, the plot develops with Elizabeth’s sister Lydia (who is as ridiculous as ever), the lecherous Wickham and some wonderfully loyal, scheming house servants. The book took a dramatic turn that I enjoyed immensely. Elizabeth’s fate begins to change drastically, Darcy runs to play hero, and more than one character gets their comeuppance. It was delightfully entertaining.

As has been the case with other Maria Grace novels, the romance element of Mistaking Her Character is certainly there, but she is able to convey concepts and passion without gratuitous details. I found the content to be at a solid PG level, very tastefully done but delicious at the same time. I feel more than comfortable recommending this to any adult reader, conservative or no. Mistaking Her Character had a slightly darker in tone than other Maria Grace novels that I’ve read, and while I enjoyed the others, this was an interesting departure for her. I understand that this is the first title in her Queen of Rosings Park series, and I look forward to seeing where she plans to take us next.


GIVEAWAY
One Ebook Copy of Mistaking Her Character

Maria Grace has graciously offered an ebook copy of Mistaking Her Character to our readers.  The contest is open internationally and will conclude at 12am EST on Saturday, August 29th. See the Rafflecopter widget below for entry options and full contest rules. Thanks for stopping by, and good luck to all the entrants! 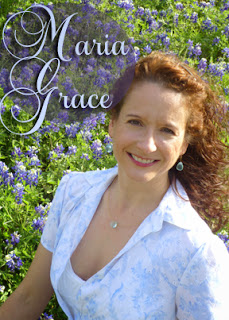 Though Maria Grace has been writing fiction since she was ten years old, those early efforts happily reside in a file drawer and are unlikely to see the light of day again, for which many are grateful. After penning five file-drawer novels in high school, she took a break from writing to pursue college and earn her doctorate in Educational Psychology. After 16 years of university teaching, she returned to her first love, fiction writing.