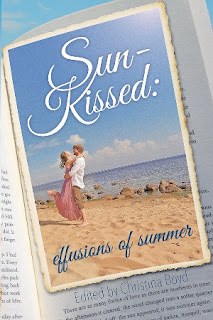 Many of you may have noticed that Meryton Press recently released a collection of short stories, Sun-Kissed: Effusions of Summer.

In fact, The Calico Critic will feature an excerpt from this book and a giveaway on June 20th! Before this title was released, Meryton held a contest for new and upcoming writers to have their work included in the collection.  It has been a great success, so they are moving forward with a new edition for the holiday season.  If you'd like to submit a short story, perhaps you'll be chosen for this new work!  Below are details-- best wishes to all who enter!

Meryton Press is conducting a contest to find the best short stories.

The theme of the contest, “Holiday Romance,” represents the season from Thanksgiving to New Year's Day. The interpretation of the theme is left to the writer’s imagination; the story may have the season as an incidental backdrop or may highlight the warmth and goodwill of the holidays. It may be a romance set entirely before a fire on a cold winter’s night, the plight of a young couple hosting their first family Thanksgiving, or the mystery of an anonymous holiday philanthropist with a reporter hot on his tale. So many holidays, so many stories: Thanksgiving, Christmas, the Winter Solstice, Kwanzaa, Hanukkah, Boxing Day, New Year's Eve…

Any genre is acceptable as long as there is ROMANCE. Austenesque is a plus but is not required. In other words, so long as there is a commonly accepted or acceptable interpretation of the theme embedded in the plot, it works for us. However, this contest is not for children’s stories. Our target audience is readers over 18 years old.

The contest will be judged by a panel of independent judges, and the results will be announced around Labor Day 2015.

In addition, all four winning entries will be published in an anthology planned for late autumn 2015. The anthology will include not only the four winners but stories from Meryton Press’s popular and award-winning authors. The Summer Lovin’ Short Story Contest volume resulting from the contest held earlier this year has now been published as Sun-Kissed: Effusions of Summer.

Here are links to the complete rules and guidelines:

Holiday contest rules are at http://merytonpress.com/anthology/

PDF file of rules at http://merytonpress.com/wp-content/uploads/2015/06/2015-MP-Holiday-Short-Stories.pdf
Posted by Laura Hartness at 12:00 AM