Book Review and Giveaway (US): The Turnip Princess 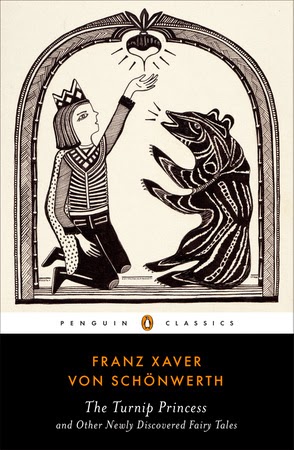 In literature and in cinema, fairy tales were an integral part of my childhood. The stories transported me to incredible worlds of magic and wonder, taking me “down the rabbit hole” in a variety of ways. The usual suspects were there: Cinderella, Jack and the Beanstalk, Sleeping Beauty… both in print and on the silver screen, these stories captivated me.  I believe my first YA novel was Beauty by Robin McKinley, which I read in elementary school in the late 70’s/early 80’s.  One of my favorite books of all time is The Neverending Story by Michael Ende. It displaced me to the extent that I literally felt as if I entered the fictional world of Fantastica.  To this day, I can remember lying in my bed, finishing the book and not wanting it to end.  It was so magical.

Over the years I’ve collected quite a few books featuring fairy tales, and as I’ve grown to understand some of the history behind these legends, I now know that they aren’t always like we see in Disney films or in the Golden Book versions of the tales. Many are dark, with social and political commentary woven throughout.  I was particularly surprised when I read an earlier version of Cinderella in which the ugly stepsisters were literally cutting their feet so that they might fit into the glass slipper. And the Hansel and Gretel story—think about it—a witch in the woods who EATS CHILDREN.   Then there’s Snow White-- The huntsman was to literally bring back her heart to the evil Queen. When we take a closer look, many of these tales do not seem appropriate for children at all!

As fairy tales have endured over the centuries, many scholars have gone about studying their history and evolution over the years.  Some of the frequently-studied authors are the brothers Grimm, Charles Perrault and Hans Christian Andersen, the men who brought to us the most well-known of fables. However, while in the Municipal Archive of Regensburg, Erika Eichenseer stumbled across 500 lost fairy tales of Franz Xaver von Schönwerth, a 19th-century folklorist from Bavaria. He lived in the same era as the Grimms, and culled his apologues from his travels in the region, talking to local storytellers and legend-keepers. Since that discovery in 2009, Erika has painstakingly put together an amazing selection of these tales in The Turnip Princess and Other Newly Discovered Fairy Tales.

The stories are divided into six categories:
The tone of the writing is very much like traditional fairy tales. It’s light, but unusual and assumes that the reader will accept just about any premise for a story. The narratives are short—some are only one page in length, and others run a few pages. Some are humorous, and others seem to be harboring a bit of social commentary.

Because my mind is so engrained with the traditional tales mentioned earlier, reading these newly-discovered stories actually felt a little strange.  They almost had an alien-like feel to them.  Not in an extra-terrestrial sort of way, but there was an oddness and unfamiliarity there.  Some didn’t make sense to me either—I had a hard time figuring out the point of some of the anecdotes.  For example, one unusual chapter is entitled A Pot of Gold in the Oven (p.167-168), in which a retired soldier discovers a stash of gold, only to find it has disappeared for seemingly no reason. And the titular fable, The Turnip Princess (p.3-5), while it did have familiar elements, also had moments of peculiarity.

Yet other chapters were very much in the vein of stories that I’ve known and loved. One of my favorites is The Little Flax Flower (p.109-11).  Like most of the tales in this anthology, it covers just over two pages. It has familiar elements, such as a beautiful maiden with a plain girl, magic, and a handsome prince-like gentleman. I loved the moral that it shares, that hard work and integrity are more important than beauty and self-absorption. In those few short pages I became devoted to the plain maiden and loved to see how her fate played out.  There were other tales in The Turnip Princess that were of similar persuasion.

While some of the stories in The Turnip Princess were at times odd and may not necessarily find their way to the Disney studios, there were many that I found enchanting, entertaining and whimsical. This title truly is a must-read for any scholar of fairy tales or oral traditions. It’s quite the historical find, and truly a classic gift to the world. Franz Xaver Von Schönwerth, Erika Eichenseer and translator Maria Tatar invested so much of their lives to bring this to us, and the literary world is better for it. This is certain to be golden treasure of its own, not likely to disappear any time soon.


Giveaway:
The Turnip Princess
and Other Newly Discovered Fairy Tales (US)


Penguin Classics has graciously offered a paperback copy of this historic title! Please use the Rafflecopter widget below and enter to win!  Contest period ends at 12am EST on April 18th, 2015.  Open to U.S. addresses only.  Prize administered by Viking/Penguin Books.

About the Editor
From www.schoenwerth.de

Erika Eichenseer, born in Munich, Germany, in 1934, was brought up in a teacher's familiy with a story-telling mother. After studying to become a teacher, she married Dr Adolf Eichenseer, also a teacher, who later became the art director for traditional cultural development in the Oberpfalz (Upper Palatinate), a part of Bavaria. Both Erika und Adolf are storytellers, authors, playwrights and poets, who have dedicated much of their lives to keeping alive the region's traditional culture.

Until 1979, Erika was a teacher in elementary and secondary schools. There she started a school theatre, adapting regional tales, such as those from Franz Xaver von Schönwerth, which fascinated her from the very beginning. Besides putting on plays, she experimented with different and mixed media such as puppets, marionettes, shadow theatre, black-light-shows.

From 1979 on she changed direction to work in her husband's institute for traditional cultural development, specializing in regional literature, documentation and the te-animation of traditional customs and arts. In this function she guided 400 amateur theatre groups in the region, giving them specialized courses, reviewing the value of their playing material, opening up many other possibilities for finding good plays, an she wrote plays herself.

In 1986, the 100th anniversary of the death of Franz Xaver von Schönwerth, the German collector of folklore, customs, myths and legends, who worked at the time of the brothers Grimm and was highly regarded by them, she edited a reader and an educational supplement with his tales for all schools in the region to promote this mostly unknown collector of the complete folk customs and tales of Oberpfalz. This was not enough, however, to launch Schönwerth, who remained unknown.

In 2010, his 200th birthday-anniversary, the newly established Schönwerth-society succeeded in raising his profile. A series of presentations, mainly planned and produced by Dr Adolf und Erika Eichenseer, focused the public view on this extraordinary personality. And "Prinz Roßzwifl" ("The Scarab Prince"), a choice of Schönwerth's fairytales, edited by Erika Eichenseer, was published.

In March 2012, an article in "The Guardian" focused international interest on the 500 unknown tales, brought to light in Erika's book an regarded as a "sensational find". Prinz Roßzwifl included new fairytales never published before, and they had the great historical value of being in the original oral format they were collected in.