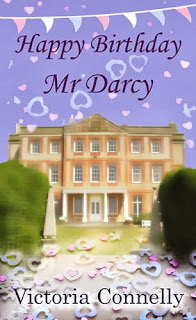 which once again reunites us with characters such as Warwick Lawton (a Janeite author who writes under a female pseudonym), Katherine Roberts (his fiancée and Austen scholar) and other colorful characters who surround them.

Happy Birthday Mr. Darcy is a brief but significant episode in the lives of Warwick and Katherine, the week following their planned nuptials. Katherine loves her antique engagement ring, the plans for the future, and of course her fiancé, but she harbors a number of insecurities and questions about the years to come. How would being married affect their relationship?  Would they be able to combine their separate worlds into one, seamlessly?  The doubts that flood Katherine’s mind become a threat to the wedding itself.  At the same time, Dan Harcourt, Warwick’s best man has his own concerns about Warwick. Add in the cynical sister of the groom, who tries to dissuade him from marrying at all, and there is quite a concoction of issues floating about.

Once again, Victoria Connelly has given her readers another delightful, light confectionary treat in this latest installment of the “Austen Addicts” series.  As before, her characters are interesting and variegated, and her writing belies her love of all things Austen.  Janeites will love all the winks to the novels and movies of this genre, which are sprinkled throughout the story.  As we celebrate the 200th birthday of Pride and Prejudice (hence the applicable title of the novella), Victoria Connelly has brought a lovely gift to the party. Happy Birthday Mr. Darcy (or any title in the series) would be a fine choice for your reading this weekend, and I encourage you to add any of the "Austen Addicts" titles to your library or e-reader of choice today.