An utterly captivating reinvention of the Rapunzel fairytale weaved together with the scandalous life of one of the tale's first tellers, Charlotte-Rose de la Force.

Charlotte-Rose de la Force has been banished from the court of Versailles by the Sun King, Louis XIV, after a series of scandalous love affairs. She is comforted by an old nun, Sœur Seraphina, who tells her the tale of a young girl who, a hundred years earlier, is sold by her parents for a handful of bitter greens...

Selena is the famous red-haired muse of the artist Tiziano, first painted by him in 1512 and still inspiring him at the time of his death, sixty-four years later. Called La Strega Bella, Selena is at the centre of Renaissance life in Venice, a world of beauty and danger, seduction and betrayal, love and superstition, retaining her youth and beauty by the blood of young red-haired girls.

After Margherita's father steals a handful of parsley, wintercress and rapunzel from the walled garden of the courtesan Selena Leonelli, he is threatened with having both hands cut off unless he and his wife give away their little red-haired girl. And so, when she turns seven, Margherita is locked away in a tower, her hair woven together with the locks of all the girls before her, growing to womanhood under the shadow of La Strega Bella, and dreaming of being rescued...

The tower. The hair. The romance. The magic.  From fairy stories in childhood, to a Disney film, to a recent YA novel, the story of Rapunzel has always held my fascination.  With her expansive tale in Bitter Greens, Kate Forsyth has written an epic, sweeping novel that goes far beyond the standard fairy tale.  It’s the story of three women, the historical figure Charlotte-Rose de la Force, the familiar Margherita (a.k.a. “Rapunzel”) and Selena Leonelli, the witch who imprisons innocent girls in a tower in order to perpetuate her youth.

Set throughout the 16th and 17th century, Bitter Greens begins with the story of Charlotte-Rose de la Force, who will ultimately become known as the author of Persinette, which was eventually adapted by the Grimm brothers to become known as Rapunzel. We see her life as it passes through high society, and on into imprisonment within a convent. While shut away in this dreary existence, she meets a nun who tells her the story of the witch Selena Leonelli, as well as her captive Margherita. Author Kate Forsyth alternates now and again between these three narratives, weaving in and out of time periods and perspectives.

As in the classic tale, the witch imprisons Margherita in a tower, far from society and alone for weeks at a time. The innocent girl is a lovely singer, and has a long braid with which Selena can climb up to visit her on a monthly basis. Through Margherita and some black magic, Leonelli is able to perpetuate her youth as she has for many years. And like the story of old, there comes a day when a handsome young man hears Margherita’s lonely singing, discovering her locked away in the tower.

Bitter Greens is a captivating, emotional tale of love, loss, power, liberation and forgiveness. It isn’t merely about a pretty girl trapped in a tower.  Much time is spent on the story of her captor, Selena, and we come to understand why she has chosen to live such a depraved, warped life.  In fact, it could be estimated that the greatest amount of time is not spent on the main Rapunzel theme, but is spent on Charlotte-Rose and her winding tale through the royal court in France to her banishment.

Kate Forsyth has written such a marvelous work, one that I enjoyed immensely. The richness of the narrative made me relish every opportunity I had to open the book, as the story undulated from storyline to storyline.  The 500 pages turned quickly as I looked forward to the next episode in each woman’s life.  In that sense, it reminded me of Ruins of Lace, another delightful work of historical fiction I read recently.

There are only a couple of things that hold me back from giving a complete, wholehearted approval of the book for all audiences.  There is a significant amount of adult content and language within the novel, especially in regard to Charlotte-Roses's storyline.  Some of it is indeed appropriate.  The world in which these characters live is gritty and at times repulsive. Prostitution was not uncommon. The plague was ravaging many villages. This gave a realism and flavor to the novel that enhanced my experience. It was the reality of the times in which they were living, and they did their best to make their way in the world. However, there were times when the material was racier than I would have preferred.  Also, I wish less time had been spent on Charlotte-Rose and more time spent on Selena and Margherita.  These two characters are the core of the Rapunzel mythos, and I couldn’t get enough of their narratives. Those reservations are offered for those who want to avoid racier content, but I still enthusiastically endorse Bitter Greens.  This is the type of book I'll remember in years to come with fondness.

It’s unfortunate that Bitter Greens seems to be hard to find these days.  I believe it was originally published out of Australia and recently out of the U.K., so you might have to dig a bit to find it if you live elsewhere.  Although that is the case, I would say it’s well worth your search. Bitter Greens is a marvelous tale, full of love, loss, adventure and triumph.  Kate Forsyth has presented us with a literary treasure, one that I hope finds a larger audience as time goes by. 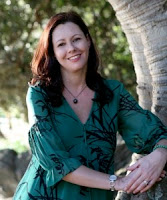 Kate Forsyth is the award-winning and bestselling author of more than 20 books for adults and children , translated into 13 languages. She was recently named in the Top 25 of Australia's Favourite Novelists. Since The Witches of Eileanan was named a Best First Novel by Locus Magazine, Kate has won or been nominated for many awards, including a CYBIL Award in the US. She’s also the only author to win five Aurealis awards in a single year, for her Gypsy Crown series of children's historical novels. Bitter Greens has been called ‘the best fairy tale retelling since Angela Carter’ and ‘an imaginative weaving of magic, fairy tale and history’. A direct descendant of Charlotte Waring, the author of the first book for children ever published in Australia, Kate is currently studying a doctorate in fairy tales at the University of Technology in Sydney, where she lives by the sea, with her husband, three children, and many thousands of books.