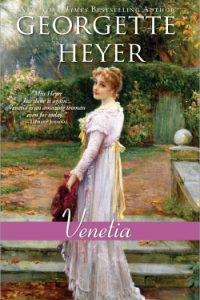 A young lady of beauty and intelligence facing an unbearable choice...

Venetia Lanyon is one of Georgette Heyer's most memorable heroines. Beautiful, capable, and independent minded, her life on the family's estate in the countryside is somewhat circumscribed. Then a chance encounter with her rakish neighbor opens up a whole new world for Venetia. Lord Damerel has built his life on his dangerous reputation, and when he meets Venetia, he has nothing to offer and everything to regret. As Venetia's well-meaning family steps in to protect her from potential ruin, Venetia must find the wherewithal to take charge of her own destiny, or lose her one chance at happiness...

As a part of the month-long celebration of Georgette Heyer’s birthday, I ventured to read her work for the very first time.  I chose Venetia, originally written in 1958, sixteen years before her death in 1974 of lung cancer.  Georgette wrote more than 50 novels and is particularly beloved by Jane Austen fans, as she frequently wrote in the Regency period and with Austen’s style.

I must say I was extremely impressed with Heyer’s writing.  While she was a 20th Century novelist, her tone so closely matched that of Jane Austen’s, it’s easy to believe that she is of another era.  She captured the period of the early 19th Century perfectly, from common customs of the time, down to snippets of English dialect that were completely unfamiliar to me.  On more than one occasion I was opening my dictionary to discover new additions to my vocabulary, to my education and delight.

My reading list has been heavy with Austenesque novels this year, so it was refreshing to be in this time period with all-new characters and storylines.  Venetia was a delight to read, with vibrant characters, chaste romantic tension and a couple of savory plot twists near the conclusion.

Heyer’s titular character is very enjoyable—she’s innocent in some ways, but smart and knows how to stand up for herself.  She cares for those around her, from her slightly-handicapped younger brother, down to the household staff she has been given to manage in the wake of family developments.  At age 25 she is nearing the age of spinsterhood, but values her affections enough to only marry for love.  This proper young lady finds herself attracted to a local, attractive rake and must find a way to either resign herself to being without him or defying the social conventions.  She also has to deal with several challenges within her family—her selfish elder brother and his nightmare of a mother-in-law, her younger brother who prefers books to people, and a number of issues surrounding the estate left behind by her cheerless, deceased father.  Venetia has much on her plate, and she handles it all with intelligence, wit, and selflessness.

I cannot recommend Venetia highly enough.  The quality of writing is excellent, the story is well told and the characters are memorable.  However, if you’re looking for a quick, fluffy read for the beach, this might not be for you.  Be prepared to settle in and just enjoy this one.  Have your dictionary at the ready and take your time.  It’s well worth it.  Venetia is a remarkable character, and Georgette Heyer is quite the author.  Her beloved reputation is well deserved, and I look forward to reading more from her.  Stay tuned for my next review, which will be of her novel, Sylvester.

Central Casting
(How I'd cast some of the characters on screen)