Book Review: The Wives of Henry Oades by Johanna Moran 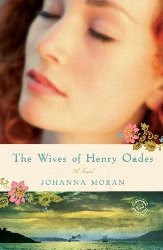 I placed a request for an ARC of The Wives of Henry Oades purely based on a brief notice that I read in the Shelf Awareness daily newsletter.  In 1892 a man loses his wife in a fire, moves away and remarries years later.  Incredibly, she was alive all along (secretly abducted by local Maori tribesmen) and shows back up in his life.  What to do??

As I write all those plot details, please know that these aren't major spoilers-- the plot points are offered in the basic description on the novel's back cover.  While major incidents, there's more to this story than a simple separation-and-reuniting tale.  The characters take a journey that goes far beyond the massive number of miles they traverse.

Tales of the old American West have never appealed to me. It might be due to the fact that movies of this time period seem to be dusty, lawless and uncomfortable.  These films have influenced my view of the genre.  After receiving the ARC, I realized that much of the story takes place in the frontier, both in New Zealand and in the American West.  I hoped that the story of Henry Oades' family would rise above my usual low expectations of the venue.

From the first sentence, Moran's writing drew me in.  While this might be her first novel, she clearly has a firm grasp of the English language.  She takes us from Britain all the way down to New Zealand, finally ending in California.  We come to know and love the Oades family: Henry, the husband and father always determined to provide for his household.  Margaret, devoted wife and mother to his children.  She's willing to leave their life in England for her husband's career, and later she overcomes incredible odds to return to him.  John, the strong son who survives much in his young life.  Josephine, the daughter whom, like John, we see grow up over the course of the story.  Other family members follow, and over time things become very complicated.

I will stop there with the plot summary, lest I give away too much.  Suffice it to say, I was thoroughly satisfied with The Wives of Henry Oades, both with the style of writing and the compelling nature of the story.  Amazingly enough, it's based on the record of a series of court trials that truly happened.  Given everything that these individuals went through, it's an amazing bit of history.  Ms. Moran has fleshed out the court records in a manner that has brought these events to life in a compelling way.  Certainly, it's worth a bit of your own personal history to spend time with The Wives of Henry Oades.


The release date for this title is February 9, 2010.  Johanna Moran will be coming to my town on March 11th for a book signing at The Vero Beach Book Center.  I will have her sign the book and will offer it up as a giveaway on The Calico Critic.  So check back here soon to win your own copy!