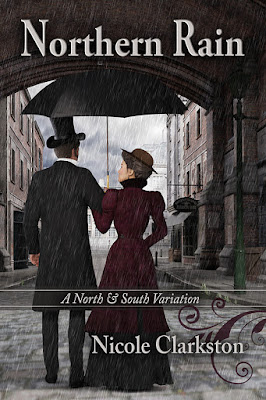 There is nothing like a long walk in the rain to guarantee a little privacy...unless the last person you wish to encounter happens also to be in search of solitude.

John Thornton is a man of heavy responsibilities who has many things on his mind, but the most troublesome of them all is Margaret Hale. She wants nothing to do with him, and he wishes he could feel the same. When a moment of vulnerability allows her a glimpse into his heart, she begins to see him differently.

Is something so simple as friendship even possible after all that has passed between them? Thornton has every good reason to move on, not the least of which is the lovely Genevieve Hamilton and her wealthy father. Will Thornton act according to duty and accept an opportunity to save his mill, or will he take a chance on love, hoping to change Margaret's mind?

Jane Austen Fan Fiction (or JAFF) tends to be the dominant genre on The Calico Critic, but for today's post, we will venture into Elizabeth Gaskell Fan Fiction instead.  "Who is Elizabeth Gaskell?", some of you might be asking.  Until a few years ago, I had never heard of her either. Through marketing and the recommendations of others, I watched the BBC television series Cranford, which is based off of a Gaskell book of the same name.  While not Austenesque fiction, it carries similar tones and sensations of that genre.  I fell in love with the characters in Cranford and became an instant Elizabeth Gaskell fan.

Due to my huge list of books to be read, to this day I still have not managed to read the source material for Cranford, although a lovely copy of the book is sitting on my shelves.  Likewise, I was given a copy of another book of Gaskell's, North and South by a fellow reader.  And sadly, it remains unread as well.  There are just so many books, and so little time in this life!

Recently I was approached to review Nicole Clarkston's Northern Rain, which is based off of Gaskell's North and South.  As I've enjoyed JAFF, I thought I would give this title a try, despite my ignorance of the original story.  At the time I'd only viewed one episode of the Richard Armitage/BBC dramatization of North and South, which certainly doesn't qualify me as an authority on the novel.  I had a very slim baseline knowledge of a few characters, so suffice it to say, I was going into Northern Rain in a fairly blind manner.

I'm delighted to report that as a new student to all things North and South, I enjoyed Northern Rain very much!  There were a few moments when I was a bit disoriented, as author Nicole Clarkston made reference to events in N&S that I was not familiar with, but after a few chapters of reading, the story took on its own new life, with new events that are unique to this narrative.  I enjoyed the characters immensely, and like other readers of Gaskell, began to see main character John Thornton as a latter-day Fitzwilliam Darcy type.  He is not as refined as Darcy, but can be stern and emotionally closed off to many.  Likewise, he and another main character, Margaret Hale begin their association on the wrong foot, which is evidenced by the tension between them at the beginning of Northern Rain.

Throughout the course of this new story, their relationship morphs into something very different than animosity, and eventually blooms into love. Theirs is not an open-and-shut case, however.  They must overcome tremendous odds in order to be together, and throughout the tale it's often unclear if they ever will survive the onslaught of obstacles put in their path.  Not only does it seem to rain every day in the town of Milton, but it seems that they have a cloud of bad luck hovering over their relationship at all times.  If fact, that is one of my few complaints in regard to the story.  Clarkston achieved such a delightful tension between her characters, it simply drove me mad at times, witnessing yet another calamity come their way!  It seemed as if they would never get together, and there were a few times when I felt that the story dragged on somewhat.  That being said, I found the writing to be extremely riveting, and I was captivated throughout.

Clarkson's Northern Rain was a delight to read.  The romance was palpable but not overly titillating, and the marriage bed was honored in ways that I appreciated as a conservative reader.  As mentioned, I'm not as familiar with the original North and South as I should be, but I credit Ms. Clarkston in planting a great seed of interest in the original novel.  I now wish to not only complete my viewing of Armitage's performance in his BBC production, but in greater measure I desire to read the original Gaskell work.  If nothing else, Nicole Clarkston has further solidified my fanhood in all things Gaskell, bringing another admirer even more closer into the fold.

Nicole Clarkston is the pen name of a very bashful writer who will not allow any of her family or friends to read what she writes. She grew up in Idaho on horseback, and if she could have figured out how to read a book at the same time, she would have. She initially pursued a degree in foreign languages and education, and then lost patience with it, switched her major, and changed schools. She now resides in Oregon with her husband of 15 years, 3 homeschooled kids, and a very worthless degree in Poultry Science (don't ask). Nicole discovered Jane Austen rather by guilt in her early thirties- how does any book worm really live that long without a little P&P? She has never looked back. A year or so later, during a major house renovation project (undertaken when her husband unsuspectingly left town for a few days) she discovered Elizabeth Gaskell and fell completely in love. Nicole's books are her pitiful homage to two authors who have so deeply inspired her.

We have an extra special giveaway from Nicole Clarkston!  We'll have two winners-- one U.S. domestic, and one international.  Here are the prize choices for our U.S. winner-- choose one of the following:


For our international winner, they may choose one of the following:

Utilize the Rafflecopter widget below, beginning with your contact information, in case you're a winner!