Book Review and Giveaway: Darcy by Any Other Name by Laura Hile 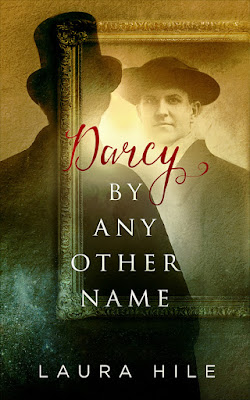 At Netherfield, a glorious evening of music and dancing...

But out in the garden two men are arguing, while a ferocious rainstorm swirls round. And then the unthinkable happens: a lightning bolt from heaven strikes. In that instant everything changes.

Shorn of his fortune, his social standing, and his good looks, Mr. Darcy is trapped in Mr. Collins’ body. And Mr. Collins wakes up to discover that he is master of Pemberley. Could there be anything worse?

But the inner man is still Darcy. He is in love with Elizabeth Bennet. And now he is living in her house.

Discover the Pride and Prejudice ‘body swap’ that has readers laughing in surprise and delight.


I’m not one for strange Austeneque story premises.  In recent years the genre has seen everything from vampires to zombies, sea monsters to rock stars.  In general, I don’t gravitate towards them. The most outlandish title I’ve read (and enjoyed very much) was Steampunk Darcy by Monica Fairview. This was a rare exception in my habits.  So the premise of a body-swap story is a bit of a departure.  Why the interest? One name: Laura Hile. While I’ve never read any of her books, I’ve interacted with her quite a bit online and have enjoyed her posts at the website, Jane Started It. Given her wit and intelligence, I’d be open to just about anything she publishes.  Darcy and Collins switching bodies?  Really?  Okay…sure—I’m game! I put it on my Goodreads list, and assumed I would get to it…one day… preferably after the completion of a graduate school class I was about to start.  Darcy by Any Other Name is 662 pages. At this point in my life, I’d begun saying “no” to most review requests in order to clear the decks for academic pursuits. Starting a novel of such length was not in my plans.

Then Laura contacted me, asking if I’d be willing to read her book.  I was thrilled!  And although I wasn’t sure it was the right decision, I said “yes” to her request.  With such a high page count, I wasn’t certain I’d be able to juggle reading it and tending to my graduate class.  Boy, was I proven wrong!  Darcy by Any Other Name might have a quizzical premise, but I was riveted!  I couldn’t believe how fast I flew through this novel, even though I was saving its reading for my limited free time away from kids, work, and school duties.

As in Jane Austen’s original Pride and Prejudice, Laura Hile’s Fitzwilliam Darcy is somewhat of a prideful man, holding much wealth and respect.  When he is transported into the body of the lowly vicar William Collins, he finds himself in a completely different position in life.  No longer revered and respected, he has the reputation of being a fool and an idiot. Collins experiences quite the opposite, as he is transferred into Darcy’s world. No longer a portly, powerless and almost penniless man, he inherits a body and an existence that many would envy.  In each man’s case, there are many lessons to be learned in living within the other’s life.

Laura Hile’s work may not be my usual traditional Austenesque fiction, but she kept me entertained throughout her novel.  She filled it with humor, excitement, and of course, romance.  I was also impressed at her ability to sprinkle a bit of Christian faith into the story without having it feel too forced or inappropriate. Darcy as Collins was so interesting—seeing him revolutionize Collins’ life further emphasized how pitiful Collins truly had been, how much more he could have been doing with his existence and ministry.  Collins as Darcy was rife with humor, as I pictured this statuesque, handsome man become the fool and begin to squander so much of the respect that Darcy had made for himself. Elizabeth Bennet’s relationship with “Collins” (who was really Darcy) becomes completely altered, as this chubby, sophomoric man changes before her very eyes. Not only does he begin to take care of his body and lose weight, but his manner is remarkably different, and shockingly, he becomes attractive.  Mr. Collins, attractive?!?  How is this possible?  Author Laura Hile makes it so, and does so handily.  Her narrative makes it very clear—our looks will only take us so far in being attractive to others.  Ultimately, it’s what’s inside that counts.  Our heart, our personality, how we treat others—this is far more important than the clothes we wear or how photogenic we are.

While I admit to beginning this novel with a positive prejudice toward the writer, ultimately it was up to Mrs. Hile to hold my attention and keep me entertained for so many chapters.  Never once did I feel bogged down in the story, and the pages flew by.  This is not a taut, tense thriller by any means.  It’s simply a well-told story with classic themes that many of us can relate to.  I applaud Laura Hile’s work, and am so glad I said “yes” to reviewing Darcy by Any Other Name!

Thanks to Laura Hile, one of YOU will be able to read this fabulous novel!  Fill out the Rafflecopter widget below and enter to win an ebook copy of Darcy by Any Other Name. Open internationally. Contest ends at 12am EST on October 8, 2016.