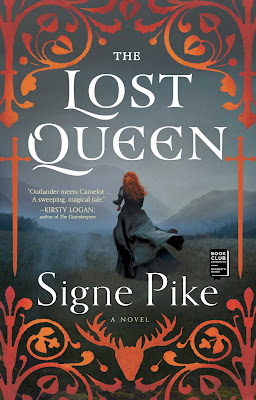 Compared to Outlander and The Mists of Avalon, this thrilling first novel of a debut trilogy reveals the untold story of Languoreth—a forgotten queen of sixth-century Scotland—twin sister of the man who inspired the legend of Merlin.

I write because I have seen the darkness that will come. Already there are those who seek to tell a new history...

In a land of mountains and mist, tradition and superstition, Languoreth and her brother Lailoken are raised in the Old Way of their ancestors. But in Scotland, a new religion is rising, one that brings disruption, bloodshed, and riot. And even as her family faces the burgeoning forces of Christianity, the Anglo-Saxons, bent on colonization, are encroaching from the east. When conflict brings the hero Emrys Pendragon to her father’s door, Languoreth finds love with one of his warriors. Her deep connection to Maelgwn is forged by enchantment, but she is promised in marriage to Rhydderch, son of a Christian king. As Languoreth is catapulted into a world of violence and political intrigue, she must learn to adapt. Together with her brother—a warrior and druid known to history as Myrddin—Languoreth must assume her duty to fight for the preservation of the Old Way and the survival of her kingdom, or risk the loss of them both forever.

Based on new scholarship, this tale of bravery and conflicted love brings a lost queen back to life—rescuing her from obscurity, and reaffirming her place at the center of one of the most enduring legends of all time.

Due to my love of the Outlander series and an enduring interest in Arthurian legend, The Lost Queen meets multiple qualifications for my reading list. In recent years I have learned of my family’s ties to Scotland, in particular my relation to Robert the Bruce (and there are more than one of those fellows). So taking a peek through the window of history into a country with familial ties is intriguing. Author Signe Pike is a highly educated writer in the arena of British history, in particular the role that Scotland plays in the story of Uther Pendragon and his advisor Merlin. She brings this knowledge to bear in the opening volume of a trilogy, The Lost Queen.

The titular character is Languoreth, a historical Scottish queen who has been somewhat “lost” to antiquity. We meet her as a young girl, long before she is wed and witness her development as a youthful twin sister to brother Lailoken, growing to a young maiden, then to a mother with many concerns weighing upon her heart. Languoreth is surrounded by a varied cast of characters: from family members, villains, spiritual advisers and men who covet her heart. Her journey as a woman involves political intrigue, religious conflict and romantic entanglement. This first novel of the trilogy concludes on the eve of the dawning of a new chapter in her life, one that seems to bear destruction and disgrace for many whom she loves.

The comparisons to Diana Gabaldon’s Outlander are not unreasonable, but Pike’s writing and focus are much different than Gabaldon’s. The romantic element is far less pronounced, and there is more emphasis on druidic traditions than the time travel “magic” seen in the Outlander series.  Religious conflict is a major theme of the novel, and unfortunately the Christians seen within this narrative are rarely Christlike in their manners. As a Christian myself, I dislike this type of personification of “believers”, as they are most likely not believers at all, but those who would use the name of Christ to achieve their political ends. In today’s culture, it’s all too easy to see the same in some of our leaders, which makes the portrayal of characters like Mungo all the more difficult to read. I acknowledge that “men of the cloth” such as he have existed for millennia, but it’s a shame that some of the worst behaviors in The Lost Queen are seen in the church. For the Christian reading The Lost Queen, it is important to keep in mind that this is merely one perspective of history. As Pike mentions in her post-novel note, history is fluid. I would agree that it is fluid in that we are almost constantly receiving new information about the past, data that alters our view of events from centuries gone by. The perspective of The Lost Queen is very much from the view of the druid, and is very sympathetic to it. As I have a firm hand on my own beliefs, I am able to read this narrative in the same way that I do when reading Outlander. My faith may be different from the characters in the novel, but I can still enjoy the journey of Languoreth, Lailoken and the others.

Aside from the religious-themed conflicts, The Lost Queen also deals with political alliances, loyalties and the threat of war. Languoreth finds herself in the midst of a love triangle, and must make difficult decisions and sacrifices for the sake of her family. Should she merely follow her heart, the repercussions could spell disaster for many whom she loves. Although she is a woman of strong temperament, her standing in society is still affected by the powerful men surrounding her.

I did enjoy The Lost Queen, and do plan to continue with the series as the story continues in The Forgotten Kingdom. Signe Pike has done fine work in capturing a certain perspective of 6th century Scotland, with well-drawn, captivating characters and thoroughly researched writing. In this new series the legacies of Languoreth, Merlin and Uther Pendragon have been given a particular Scottish (and presumably accurate) slant, one that I look forward to taking in as the trilogy continues. There is more to the Arthurian legend than I realized, and The Lost Queen is an entertaining beginning to a new retelling.

Book Trailer for The Lost Queen

Signe Pike was born in born in Ithaca, NY, and graduated from Cornell University with her Bachelor of Science in Communication.

She worked as an acquisitions editor at Random House and then Penguin, before leaving to write her first book, Faery Tale: One Woman's Search for Enchantment in a Modern World. Pike has spent the past ten years researching and writing about Celtic history, myth, folklore and tradition. Her love of history, the great outdoors, early medieval and ancient archeology, and her dedication to historical accuracy has made her social media feeds an informative delight to her readers.

Signe teaches seminars and workshops internationally on writing and publishing, as well as on folklore and tradition. Her writing has been published by Salon, Charleston City Paper, Book Riot and NPR.org.

Posted by Laura Hartness at 2:32 PM No comments: