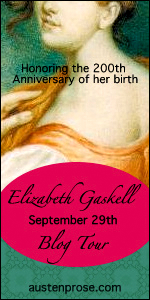 Welcome to the Elizabeth Gaskell Bicentenary Blog Tour, sponsored by Laurel Ann at Austenprose.com.  I hope you have an educational and entertaining experience as you visit the various sites along the way!

Unlike most of the blog tour participants, I haven’t read a word of Mrs. Gaskell’s work.  Until recently, I’d never heard of her.  Then the miniseries Cranford and Return to Cranford came to PBS with much acclaim from critics and adoration from fans.  With all the excitement surrounding these broadcasts, I considered taking a look to see if they really were all they were cracked up to be.  But my cursory examination of the production falsely led me to believe that it was just another period piece with silly women in bonnets flitting about.

When Laurel Ann invited me to the tour, I decided to give the series a try.  This author seems to be so beloved by those who know her, and this tour confirms for me the important place that she holds in literature.  So off to the public library I went, where they had a 2-disc edition of the BBC’s production of Cranford.

I had some time on a Saturday and hoped I’d get at least one of the 60-minute episodes watched while my guys were out of the house for a bit and I could watch in peace.  To my utter astonishment, not only did I end up having 5 hours free time, but I watched the entire series that day!  Needless to say, I loved this program.  Here’s an overview of the episodes, and I’ll do my best to avoid spoilers for those who haven’t seen them:

Lovely introduction!  I felt like I was in a Jane Austen novel. What a quaint little English town Cranford is.  It’s calm and peaceful, not even requiring a police force to keep order. Possibly the most dysfunctional aspect of it all were the well-meaning but silly busybodies running about spreading rumors and getting their facts mixed up all the time.  I had previously thought that all these “chickens” would annoy me, but they were quite funny and entertaining.  This was especially true of the hysteria-prone Miss Octavia Pole, played by Imelda Staunton.  Her moment with the cat and the lace was just hysterical.

While there were many moments of laughter in this episode, dramatic scenes brought plenty of levity to the program.  We see the struggles of the poor in the community, one of the residents is shockingly injured, and a mother longs for her rarely-seen son.  One of the main characters suffers a devastating loss, and the manner in which she is supported and comforted was so amazingly touching.  The closing scene of Captain Brown bestowing a gift to one of his neighbors was so touching—at the end of this episode I was hooked. I knew I was in for the entire series.

The episode begins with the young (and tardy) Dr. Harrison rushing off to church, eager to cross paths with a young girl with whom he’s taken an interest.  Other relationships are explored, and there’s much fussing about as the ladies of the community prepare for a very special garden party to be held at Lady Ludlow’s estate.  We get to know a poor family with a young boy yearning to get out of his situation and to get an education.  And a young female resident’s crush on the young doctor becomes apparent, setting up a series of misunderstandings that affect almost the entire community.  The news of the arrival of a railroad (and therefore much change in Cranford) leads to the death of a major character, which quite surprised me. This episode isn’t as light as the first, but an incident with a cow is quite amusing.

This episode was touching and quite spellbinding in parts.  My heart ached in sadness as well as joy throughout the hour.  I dare not minimize its effect on me by a lot of words here.  I will say that when one character’s friend dies, I was more than teary-eyed.  I honestly wanted to sob.  My 10 year-old son was with me at that point, so I held it together in front of him.  Had he not been there, I probably would have been a mess.  It was an amazing, heartbreaking episode.

If I could give this episode another title, it would probably be “Much Ado About Nothing”, at least in regard to the miscommunications that occur.  The machine of misunderstanding reaches a feverish point between many of the characters.  It’s clear that all of these well-meaning folk are just seeking out love and betrothals, but with the rumor mill being what it is, poor communication causes much confusion and dismay.  The episode has its light moments, but it feels more like a bridge episode, carrying us to the concluding hour as many characters begin to take on new paths in their lives.

The final episode brings the series to its conclusion quite well.  Issues in relationships are resolved, and while tragedy strikes some, they rise above their challenging situations to triumph in their own way.  There’s a significant amount of tense, life-or-death drama here.  And with more than one main character dying during the previous episodes, I honestly didn’t know how everything would turn out.  Fortunately, the ending was lovely.  It wasn’t completely “happily ever after”, but a believable reality that left a fine aftertaste of joy.


Cranford was a delightful surprise.  I relished every moment, and those 5 hours on my Saturday flew by.  Having that block so much free time was rare, and I’m grateful for it.  I absolutely loved this miniseries, and I can’t wait to see the next production, Return to Cranford

Of course as a book lover and member of this tour, I had to investigate Mrs. Gaskell’s work.  She’s written quite a few things, and I look forward to reading Cranford, Mr. Harrison’s Confessions and My Lady Ludlow, the three books upon which this series was based.  I’ve already downloaded a copy of Cranford

I thank Laurel Ann for including me on the tour, for without it I would still be in the dark about Mrs. Gaskell.  Had they lived in the same era, I’m sure Elizabeth Gaskell and Jane Austen would have enjoyed each others’ work.  This Janeite certainly did.

Now that you’ve stopped by The Calico Critic, follow this link to the next stop on the Elizabeth Gaskell Bicentenary Blog Tour by Regency Romantic.  Joanna is going to offer her review of the Gaskell novel Ruth from 1853 on Austenprose.com

As you visit each stop on the tour, be sure to leave a comment at each posting.  One commenter from these tour sites will win a copy of an unabridged audio book edition of North and South

by Naxos AudioBooks read by Clare Willie.  The deadline for leaving comments on the participating sites is midnight Pacific time on October 7th.  One name will be drawn by Random.org from The Calico Critic and sent to Laurel Ann at Austenprose.com, where she will draw from all the names sent in from the participating sites to determine the final winner.

**Winner Announced:  Annette made a comment over on Stiletto Storytime and was chosen to win.**